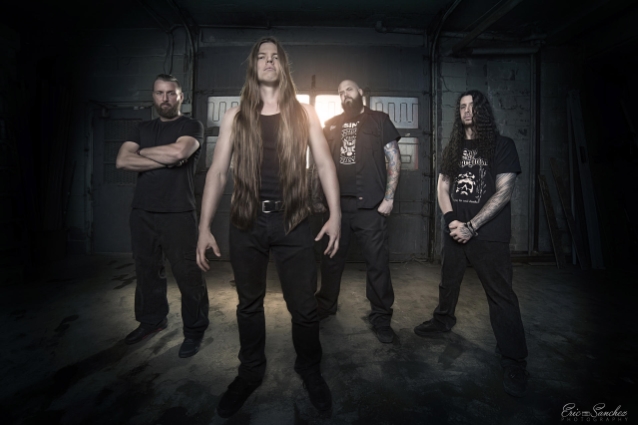 Stephanie Jensen of Infernal TV conducted an interview with frontman Matt McGachy of Canadian extreme metal veterans CRYPTOPSY prior to the band's April 10 concert at The Haven in Orlando, Florida, alongside ABORTED. You can watch the entire chat below. A few excerpts follow (transcribed by BLABBERMOUTH.NET).

On performing songs from CRYPTOPSY's 2018 EP, "The Book Of Suffering - Tome II":

Matt: "I'm comfortable now. The first few times was a struggle. CRYPTOPSY, we tend to not practice enough before going on tour. We each work on our stuff in our own corners, then attack it onstage together. The first European shows where we were playing [new] songs were a bit sketchy, figuring out where to put my breaths, crowd interaction and chant-out sections changes your whole diaphragm position, then you hit the end of your sentence and you're out of air. So, that was a struggle. I also have been working on a new vocal technique which we call the 'Chris bark', which we discovered in the studio. I was walking back into the recording room and I was just warming up my voice with this scream and Chris [Donaldson], our guitarist, who is our engineer, was, like, 'Let's try that on a track, just to hear what it sounds like.' We liked it and we put it in a bunch of places. To discover how to do that live in Europe, too, was like 'Uh oh.' I remember the first show, but now it's really easy and it's become my go-to [original vocalist] Lord Worm-era CRYPTOPSY song voice."

On the differences between "The Book Of Suffering - Tome I" and "Tome II":

Matt: "I know what my differences are. I built all the songs — my normal path of writing lyrics and vocal patterns would be I wait to receive tracks with drums and guitars and from there, I would start working. This time around, my son was going to be born in late May or early June and I saw the window of our studio time getting shorter and shorter and shorter and I was so afraid that they would call me and say, 'Matt, you're up.' I was like 'I can't come because he's going to be born and I don't want to be doing this right now, I want to be focused on the EP.' I didn't want to have that in the back of my mind. What I did, I just asked for the guitar tracks. No drums, just guitar tracks and clicks. I sat there and counted out all the riffs, tapping a pencil on the paper and I deconstructed the songs that way, then I wrote my lyrics that way and I feel that the songs are more like in tune with the rest of the songs and the riffs to the point onstage, all I want to hear is my guitarist's guitar and my voice and I can survive."

On whether CRYPTOPSY has started work on "Tome III":

Matt: "I know what it's going to be about, that's for sure. 'The Book Of Suffering' is a package of EPs that are based around suffering — keeping it simple. 'Tome I' is about people who cause suffering. 'Tome II' is about people who have escaped suffering and 'Tome III' is about people who have witnessed suffering. I don't know what I'm going to write about, but I know where I can go. The band being in the position it's in right now with Olivier [Pinard, bass] joining CATTLE DECAPITATION and going out and recording with them and touring with them and Flo [Mounier, drums] doing VLTIMAS and touring with them, so our windows of being able to get together to write this out is getting narrower and narrower. We've picked two sections in our upcoming free time, so I hope those sections work out and we can get the EP out much faster than 'Tome II'."

"The Book Of Suffering - Tome II" was released last October. The cover art was created by Remy C. from Headsplit Designs. The effort was produced, mixed and mastered by Donaldson at The Grid studio in Montreal, Quebec, Canada.