Swedish all-girl hard rock quartet CRUCIFIED BARBARA has signed a recording and publishing deal with Despotz Records. The band is putting the finishing touches on its fourth album for an August release.

Said CRUCIFIED BARBARA in a statement: "We have more energy and take a much clearer position than ever before, and the result has been so far our absolute best, hardest and most important album.

"We are super excited to have signed with Despotz. The album of the year deserves a fantastic record label."

Added Despotz co-founder and partner Ömer Akay: "The signing of CRUCIFIED BARBARA fits perfectly in line with our strategy and goal to be a choice for Sweden's biggest rock bands, where they can work closely with a local Stockholm-based music company on a global basis with an international PR and distribution network. We are incredibly proud that these wonderfully gifted musicians chose to sign with Despotz."

CRUCIFIED BARBARA's latest album, "The Midnight Chase", was released in May 2012 in Europe and in July 2012 in North America via Nuclear Blast. The CD was recorded at Music-A-Matic Vintage Recording Studio in Gothenberg, Sweden with sound engineer Henryk Lipp and producer Chips Kiesby.

Formed in Stockholm in 1998 by bassist Ida Evileye (now-wife of MESHUGGAH drummer Tomas Haake) and Force, CRUCIFIED BARBARA plays a fiery brand of rock 'n' roll tinged with metal and lashings of punk, pop, thrash, and whatever else dares to cross their path. Ida Evileye dominates her trusty Sandberg bass, Force rocks steady on her '76 Gibson Explorer, Coldheart belts out her unapologetic vocals while riffing all over her Gibson Gothic Flying V, and Nicki Wicked pounds on her hot pink sparkle Yamaha Maple drum kit until you're splayed across the floor with a bull's-eye knock-out punch that'll make you spit your teeth out. Now you know what happens when MOTÖRHEAD mates with THE RUNAWAYS. 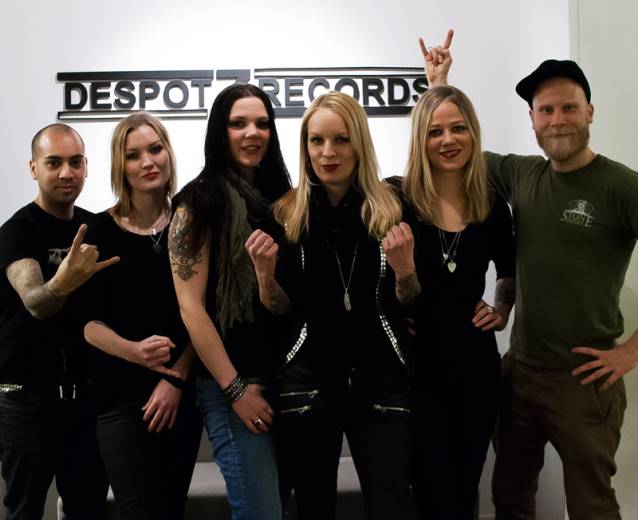