Swedish all-female rock/metal band CRUCIFIED BARBARA will release its second full-length album, "Til Death Do Us Party", in Scandinavia on February 11 and in the rest of Europe on February 27.

"Til Death Do Us Party" was produced by Mats Levén, who is better known as the vocalist for such acts as THERION, YNGWIE MALMSTEEN, KRUX, TREAT, AT VANCE and ABSTRAKT ALGEBRA.

Check out the album artwork below.

CRUCIFIED BARBARA shot a video for "Sex Action" on November 17 at Harry B James in Stockholm.

"Sex Action" is available for streaming on the group's MySpace page.

Fan-filmed video footage of CRUCIFIED BARBARA performing "Sex Action" on September 6, 2008 at Corporation in Sheffield, UK can be viewed below.

CRUCIFIED BARBARA in 2006 released a special edition of its "In Distortion We Trust" (2005) album via GMR Music, featuring a bonus DVD containing 40 minutes of live footage and backstage material filmed during the previous year.

The band supported "In Distortion We Trust" by touring Europe extensively. The group opened for MOTÖRHEAD in the UK, and SEPULTURA and IN FLAMES in Scandinavia. 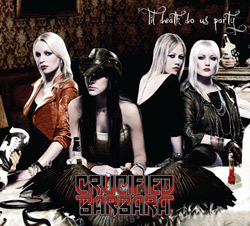