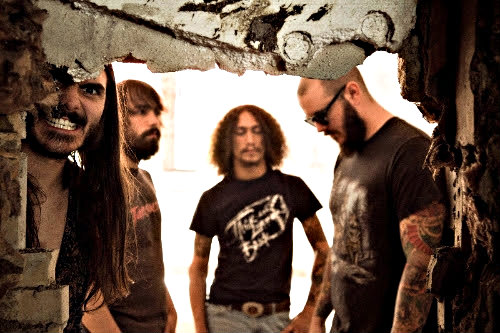 Wind-Up Records has announced the signing of Central Pennsylvania's CROBOT. The band is currently in the studio with famed producer Machine (CLUTCH, LAMB OF GOD, COBRA STARSHIP, GYM CLASS HEROES) working on the follow-up to its independently issued debut album, "The Legend Of The Spaceborne Killer", for a 2014 release.

Commented CROBOT singer Brandon Yeagley: "CROBOT has found the mother caravan in signing with Wind-Up Records who will keep our stones from growing moss. After all, you can take the heart out of a gypsy, but you can't take the gypsy out of a heart."

CROBOT embodies a mixture of groove-heavy riff-rock that will want to make you bang your head and shake your ass. Think of them as WOLFMOTHER's American cousins on acid who smell like leather and whose music scorches your ears like hot sauce to the taste. You can't help but feel that you are taken into another dimension and back again with the songs of CROBOT.

CROBOT will be on tour in select cities across the United States in 2014 with CLUTCH and THE SWORD. The 15-date tour begins on January 2 in Asheville, North Carolina.