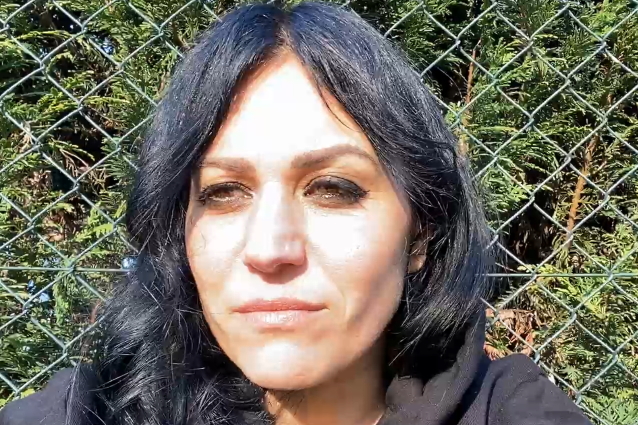 LACUNA COIL singer Cristina Scabbia has released a longer video explaining the band's decision to take part in an initiative dubbed "L'Ultimo Concerto?" (Last Concert) to highlight the increasingly uncertain future of music venues. Instead of delivering live performances as part of a scheduled free virtual stream on Saturday, February 27, each of around 130 Italian artists was filmed taking the stage at a different venue and then standing there in silence as a way of commemorating the one-year mark since the first Italian venues closed.

On Sunday (February 28), Scabbia took to her Twitch livestream to offer a more detailed clarification of LACUNA COIL's reasons for participating in "L'Ultimo Concerto?" and to express her sympathy for fans who felt shortchanged by the experience.

"Sometimes there is a price to pay if you want to stand up for your ideals," Cristina said. "And we wanted to send a very strong message. That's why we decided to be part of this protest that is a way to support live clubs that are closing. They asked us to participate, together with more than 120 bands. And we have decided to accept. So it is not an attack towards our fans. It was not our way to create an illusion and malcontent and discontent and frustrations and sadness and anger, because we didn't mean to play with your expectations, and we know better than a lot of people that this pandemic ruined our lives and it took [a huge toll] on a lot of us.

"Our participation was the response to an invitation," she continued. "The only difference is that, compared to pretty much all the other bands [that took part in the protest], we are known out of Italy. So for us, the problem was, well, if we announce this concert, we have to say it in English as well. Because if we don't say it in English, a lot of people will say, 'Oh, why not for eyes out of Italy?' So we had to announce it. But if you notice, we only posted the virtual poster that we got from the organizers. We never published it. If you notice, you guys asked me a few times, 'What's gonna happen? What do we have to do? Where do we have to look at it?' And I was very, very short with words, with descriptions. We never [promoted it any further], and we didn't do it for a reason, because we already felt bad, because we already felt that we were kind of tricking people. But this was the only way to send a very strong message.

"I read many, many, many of your messages yesterday. Some of them understood, some of them were really pissed off, and I absolutely understand the frustration and the anger. But at the same time, whoever left a harsh message helped us anyway to scream even louder. Because believe me that they talked about it, and it was on Blabbermouth today. A lot of journalists are following LACUNA COIL, so they already wrote me, they want to do interviews, so we can talk about this.

"Some of the people were, like, 'But we are the wrong people to give the message to, because we are supporting you guys; we are buying the merch and we are buying the tickets of the concert.' But the point was to create a reaction that would make a lot of people say, 'What the fuck is going on right now? Why they didn't play? Why they stood there? Why they're sending this message?'

"It is hard to find the proper words, because I understand — I understand the reaction," Cristina added. "Today the tone of the messages [from fans on social media] changed completely, because after the frustration, you just sit down, you breathe in, you breathe out, and you think, 'Okay, it was bad to realize that there was no concert, but I understand why they did it.'"

Organized by KeepOn Live, Arci, Assomusica and Live DMA, the "L'Ultimo Concerto?" campaign was announced in January when the venues shared images on social media of their year of foundation and the year 2021 with a question mark, suggesting that their closures due to the coronavirus pandemic could be permanent.

Earlier on Saturday, Italy announced it was tightening restrictions in five of the country's 20 regions in an effort curb the spread of the coronavirus.

There have been more than 2.9 million confirmed coronavirus cases and 97,500 deaths in Italy since the pandemic began. It is the second-highest death toll in Europe after Britain and the seventh-highest in the world.