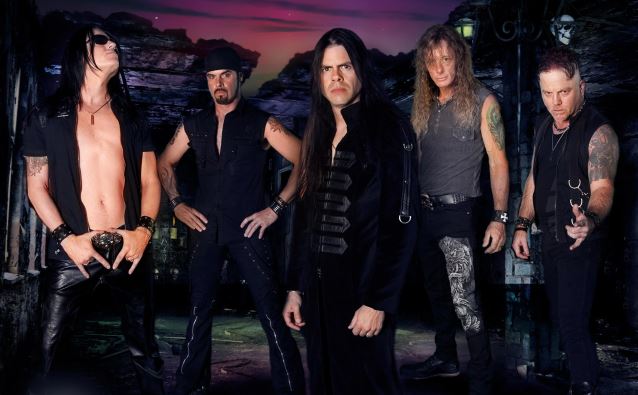 "For those of you who are wondering, CRIMSON GLORY have NOT hung up their hats!

"The members of CRIMSON GLORY have all been very busy indeed.

"Real fans of the band should check out ALL of the guys various side projects because they ALL rock!

"Jeff Lords [bass] has been working very hard with his band DARK MATTER!

"Dana Burnell [drums] has been working very hard with his two bands, A PERSUASIVE REASON and AVENGING BENJI!

"Ben Jackson [rhythm guitar] has been working very hard with his band AVENGING BENJI as has taken on a spot in PROJECT TERROR!

"Jon Drenning [lead guitar] has had a quiet year as he has been spending much quality time with his baby son, Jet!

"Jon, as well as all the guys, have many very cool songs and song ideas in the vault for a possible future CRIMSON GLORY record! No promises are being made at this time about any specifics or time frame regarding said record or who the singer may be. When we know more, you will know more.

"Were we happy when 'our' discovery, Todd La Torre, resigned to embark on his future with QUEENSRŸCHE? It was sad parting for us but we really couldn't be happier for him or more proud of him than we are!

"We would all just like to shout 'Hello' to all our fans around the world who have followed us throughout the years!

"Our connection with our fans means everything to us! You make our musical journey exciting and colorful and all of the sweat, blood and tears worthwhile."

Todd La Torre quit CRIMSON GLORY in February, explaining in a statement that "the main reason for my resignation from CRIMSON GLORY is primarily due to its inertia status."

La Torre, who joined QUEENSRŸCHE in June 2012 as the replacement for Geoff Tate, became an official member of CRIMSON GLORY in April 2010 and played a number of shows with the band during the past three years.

La Torre made his first public appearance with CRIMSON GLORY at ProgPower USA X as one of seventeen guest performers paying tribute to Midnight, the band's original singer.

Essentially unknown to the mainstream progressive metal scene, La Torre spent 22 years earning his stripes and solidifying himself as an unquestionable talent behind the drum kit of various hard rock and heavy metal projects in the Tampa Bay, Florida area. However, his vocal aspirations went largely unfulfilled until 2009 when Matt LaPorte (JON OLIVA'S PAIN), who had only heard La Torre sing on a few occasions, casually mentioned to CRIMSON GLORY guitarist Jon Drenning that he might make a nice addition to the already stellar lineup of performers the band had accumulated. It was only a short time later that La Torre found himself at the band's rehearsal studio, and the pieces began to fall into place.