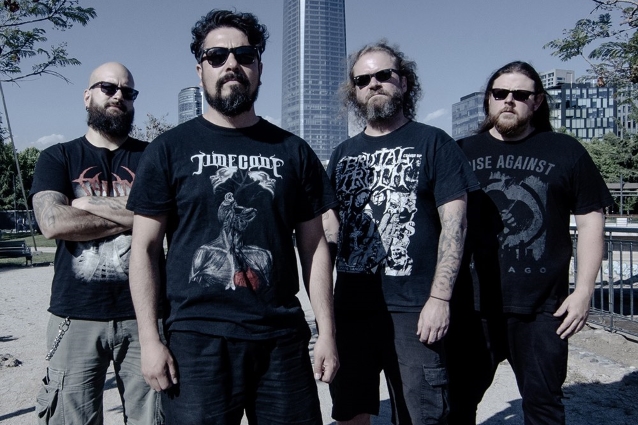 Chile's premier metal export CRIMINAL has announced the addition of drummer Danilo Estrella to the group's ranks. Estrella replaces Zac O'Neil, who left the band amicably over a year ago.

"We know many of you were waiting for an explanation as to what happened with Zac," states band leader Anton Reisenegger, "especially considering he had been in the band for 16 years. The simple truth is he didn't want to tour and was not into it anymore, so we had no choice but looking for a replacement.

"I know in an ideal world you would like your band to keep a constant lineup, which has proven difficult for CRIMINAL," elaborates Reisenegger, "but life has many twists and turns, and in the end, you've got to do what you've got to do in order to keep the machine rolling.

"Sergio suggested we try Danilo, whom he had known for years, from when they were in music school together. We made him jump in at the deep end, having to learn a whole set of songs and play live with just a couple of rehearsals, and he totally nailed it. For a while, we hesitated to make him an official member, but after we started working on new material, it became clear that he was ideal for the job. His youth, talent and enthusiasm are exactly what the band needs right now.

"We have already written three songs for a new album, and we are super excited about them. They are simpler in riffing and structure than our past few records, but we feel they connect with the band's beginnings while taking us to an entirely new place musically."

Danilo, who has already gained experience with bands such as TIMECODE and FORAHNEO, commented: "CRIMINAL is one of my favorite bands, and I've been listening to them for over two decades. It's an honor for me to be playing music with such great guys and excellent musicians. It's incredible for me to be typing these words, but it's true, now I'm a CRIMINAL!!!"

With the addition of Estrella, the CRIMINAL lineup is now three fourths Chilean again.

The band will enter the studio in the summer to record the follow-up to 2016's "Fear Itself". The new record will be released by Metal Blade Records towards the end of 2019.