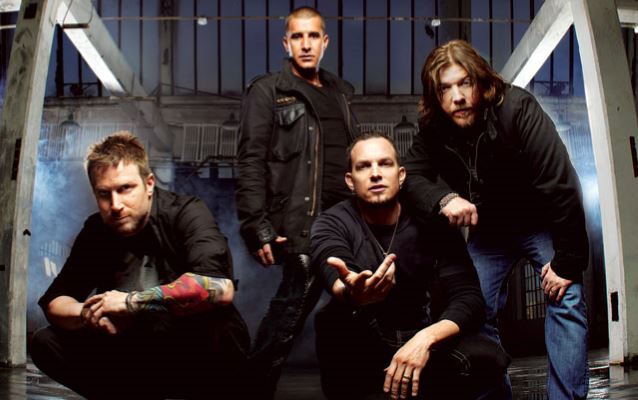 According to The Pulse Of Radio, CREED and ALTER BRIDGE guitarist Mark Tremonti said in a new interview with Classic Rock that he, bassist Brian Marshall and drummer Scott Phillips — who all play in both bands — have not spoken with CREED singer Scott Stapp since the end of the band's 2012 tour.

Tremonti explained, "We haven't spoken with Scott since the last tour years ago. Me, Flip and Brian haven't talked about doing it, we're just content with doing ALTER BRIDGE and we're busy as hell doing the TREMONTI stuff."

Tremonti continued, "I've got a full plate at the moment and I'm perfectly happy with where I'm at. There's no plans [for CREED] right now."

The guitarist is currently at work on the second album from his solo band TREMONTI, which will follow up 2012's "All I Was".

Mark Tremonti compared the crowds for CREED and ALTER BRIDGE a while back. "The crowds are very, very similar," he said. "From the ALTER BRIDGE crowds to the CREED crowds, the CREED crowd is much more — you could walk through it without getting hurt, you know? It's a much more tame crowd, I would say. I mean, when the show's going and we're rocking, they're very into the show, but it's a respectable, sing-song kind of crowd."

ALTER BRIDGE's latest album, "Fortress", was released in 2013 and debuted at No. 12 on The Billboard 200 album chart. They recently wrapped up a U.S. tour.