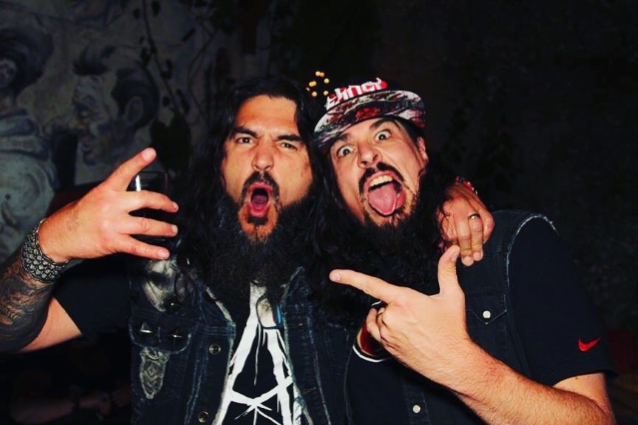 Craig Locicero says that he is not joining MACHINE HEAD as the replacement for the recently departed Phil Demmel.

The guitarist, who previously played with MACHINE HEAD frontman Robb Flynn in FORBIDDEN, addressed the issue in response to comments from various fans who have inquired about the possibility of the two musicians rejoining forces in the veteran San Francisco Bay Area metal outfit.

On Friday (February 22), Craig took to his Facebook page to write: "It's time to address the elephant in the room.

"NO. I AM NOT JOINING MACHINE HEAD.

"I've been hit up about joining the band every single day of my life since Phil Demmel left the by people from all over the world. As has Robb. It's been relentless.

"Not that the gig was going to be handed to me anyhow. I'd still have to try out. Do I think I'm capable of winning the gig if I did try out? Of course! As I should feel.

1) I value my friendship with Robb a lot more than I want to play in his band and be his employee. We've known each other since 1984 and we're better friends than we ever were back then. We like that.

"I feel like [if] I don't see DRESS THE DEAD through, I'd be making a huge mistake. It's taken a while to get to this point. We're locked in and things are looking pretty fucking good. Ever since Kayla [Dixon, vocals] got here, we've been clicking more and more. I owe it to Mark [Hernandez, drums], Dan [Delay, guitar], James [Walker, bass], Kayla and myself to see that our special brand of metal gets out there. We've worked hard on getting our sound and ideas in line. We're ready.

"Gonna to be completely honest here. I've thought long and hard about the opportunity of seeing the world with MACHINE HEAD. At that high level of production. I love both Robb and Jared [MacEachern, bass]. We all get along great and have a tangible musical chemistry already. Any time we get together to do 'Robb Flynn & Friends', everyone feels it. It's partly because we keep it all fun. No pressure. Just music, laughter and camaraderie.

"There's been a lot of judgements past down through the metal community as of late about Robb and the MACHINE HEAD camp. Much of it he owns. As he should. Some of it unfair and hearsay. I've watched Robb grow from this. He was gutted and felt responsible. Been around him a lot as of late and he's definitely taken a step back in the right direction.

"Whoever gets the gig of drummer and guitarist in the new MACHINE HEAD will be very lucky dudes. It's a streamline metal machine at the ready. It's also gonna be a TON of hard work and dedication with three-plus-hour sets every night. They'd better love every second of it, because that train ain't slowing down once it starts again.

"So there it is. I support Robb in his next adventure and he's been nothing but supportive to me and DRESS THE DEAD.

MACHINE HEAD has yet to announce replacements for Demmel and drummer Dave McClain, who completed their final tour with the band in November.

Demmel, who first played with Flynn in VIO-LENCE in the late 1980s and early 1990s, said in a statement saying that it was "simply time" for him "to step away and do something else musically." He later revealed in an interview that he was minimally involved in the making of MACHINE HEAD's latest album, 2018's "Catharsis", a record that he said he hated. He also said that MACHINE HEAD gradually "became a Robb Flynn solo project, and that isn't what I signed up for."

It's time to address the elephant in the room.

NO. I AM NOT JOINING MACHINE HEAD.