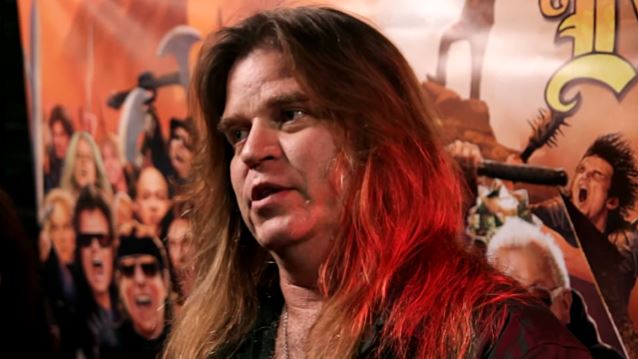 Speaking about ENDANGERED SPECIES, the new band he formed with former QUIET RIOT frontman Mark Huff, guitarist/keyboardist Wayne Findlay (MICHAEL SCHENKER GROUP), drummer Chris Moore and bassist Dario Seixas (FIREHOUSE, STEPHEN PEARCY, JACK RUSSELL'S GREAT WHITE), Goldy said: "For the longest time, I've been saying this, but now I have it… I've been wanting to put the 'holy shit' factor back into the hard rock and heavy metal genre. 'Cause I miss those bands like DEEP PURPLE and LED ZEPPELIN and VAN HALEN, a group of guys who were all virtuosos and motherfuckers and they all — each one — were motherfuckers, but they were able to agree, for the time they were together, and created some amazing music that we have never seen the likes of since."

He continued: "There's been a lot of great bands out there — I'm not saying that there's not a lot of great new bands — but nothing like DEEP PURPLE and LED ZEPPELIN and VAN HALEN. So I got a group of guys that are all motherfuckers and virtuosos in their own right. The singer that we got is really one of the best vocalists on the planet right now. His name is Mark Huff. He used to sing with QUIET RIOT between 2010 and 2012. But he's one of the most amazing singers I've ever worked with and ever heard. And I can say that now, because it's taken me a long time after Ronnie's [James Dio] passing for me to get excited about working with another singer. And then we have a bass player who can also sing lead. He looks great, he plays great, he's got great song ideas. The keyboard player also worked with Michael Schenker. He plays guitar and keyboards and sings background vocals. The drummer, Chris Moore, is just amazing. They're all fucking motherfuckers in their own right. And then they're good people. So that's two things that are hard to find. And then to agree on the type of music that we're going to create together. And then to be able to do it in a way that… There's twists and turns and unexpected moments in the music that makes it unique and fresh and new, but also familiar enough to get a very warm welcome on the first listen. That's hard to do. And they all live in Southern California. And that's hard to do. So just those six things alone are amazing. But these guys, I'm really, really, really fortunate to be doing this with."

Asked if ENDANGERED SPECIES is in the process of recording any original material, Goldy said: "The singer [Mark Huff], actually, him and I did two songs. I did my own personal tribute to Ronnie on May 16 of [2014]. It was two songs that I did as my own personal tribute. And the singer for this band sang on those two songs. And those are [available for download at] CraigGoldys13thFloor.com. And for every purchased download, a donation is made to Ronnie's cancer research fund or to whatever charity the individual downloader chooses. But there's two songs. One of 'em is about Ronnie's passing and the perspective of the fans, the band that was left behind and myself. And the other song is about Ronnie — how he seemed to just come out of nowhere."

He continued: "When Ritchie Blackmore left DEEP PURPLE, it was my favorite band in the world… [and they] just went upside down. And then there's disco. And I'm, like, 'What the hell is going on?' But all of a sudden I hear [RAINBOW's] 'Man On The Silver Mountain' on the radio, and I went, 'What the fuck is that?' It's like [Ronnie] just came out of nowhere. And how hard he worked on his lyrics and the… But little did we know what that treasure and that universe that he created hadn't even been… We hadn't even scratched the surface when 'Man On The Silver Mountain' came out. I mean, that was good enough. But then to find out who that man really was… So I wrote that about him and about that."

ENDANGERED SPECIES made its live debut in October 2014 at Ramona Mainstage in Ramona, California under the name CRAIG GOLDY'S 13TH FLOOR.

The band is currently working on material for its debut album, to be released later in the year.