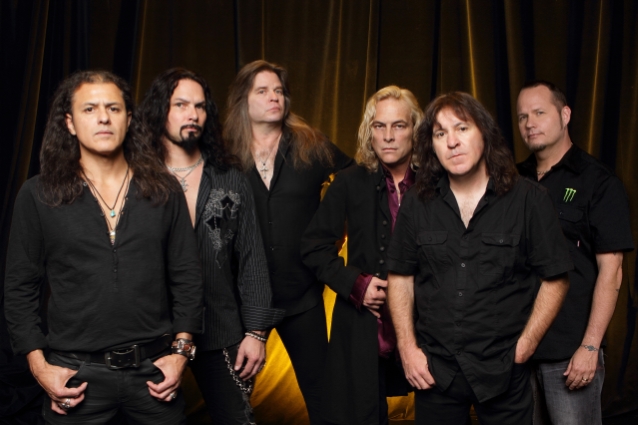 Craig Goldy has revealed to "Talking Metal" that he has been collaborating with fellow former DIO member Jeff Pilson on the material for the debut DIO DISCIPLES album, tentatively due next year. "That's where the new-era stuff really comes from — the connection between me and Jeff," Craig said (hear audio below). "His mind is just… He's just brilliant. Whenever I go to his studio, I call it The Laboratory [laughs], and he's The Professor. So my nickname for him is The Professor, and the studio is The Laboratory."

He continued: "But everybody's got great ideas… DIO DISCIPLES will be a collaborative effort — it won't be just me and Jeff. But a lot of it — probably the majority of it — will be. But then again, those songs will then be brought to the band. Simon's [Wright, drums] got a lot of great ideas, and so does Bjorn [Englen, bass] and so does Scott Warren [keyboards] and Tim ['Ripper' Owens, vocals] and Oni [Logan, vocals]. Oni writes great lyrics, and Tim just sings so amazing that the songs will take on a completely different shape, like they did on the demos that we did that no one's ever heard yet."

DIO DISCIPLES is made up of former members of DIO, along with a rotating lineup of vocalists, including Owens and Logan.

The band, which pays tribute to Ronnie James Dio, is fully supported by Dio's widow/manager Wendy.

Billed as a "celebration of the music and legacy of the greatest singer in the world, Ronnie James Dio," DIO DISCIPLES have been playing Ronnie's music on tour in a bid to keep their old bandmate's memory alive.

Pilson is best known for playing bass with DOKKEN and FOREIGNER, but he also toured with DIO in the 1990s and performed on three of the group's albums — "Strange Highways" (1993), "Angry Machines" (1996) and the group's tenth and final studio release, "Master Of The Moon" (2004).

Owens told Canada's The Metal Voice about DIO DISCIPLES' forthcoming debut album: "We're not making a DIO record. We couldn't do that. The best thing is, we've all done different types of records, but there's always some similarity to the classic metal and classic rock format, because we have this in us. But we still always move forward a little bit. But that's what it's gonna be. JUDAS PRIEST, DIO, AC/DC — all these influences are in us, and they're not gonna leave us. It's just us writing songs. It's not us writing songs to sound like something; it's us going in and writing songs."

Several years ago, Goldy revealed DIO DISCIPLES were planning to start work on a project of original material, and they debuted three of the new songs during their May 2016 appearance at the "Ride For Ronnie" motorcycle rally and concert in Encino. Fan-filmed video footage of one of the tracks, which is apparently called "Till The End Of Time", can be seen below.

Wendy revealed in an interview this past spring that DIO DISCIPLES' debut album will be released via BMG.