British extreme metal veterans CRADLE OF FILTH will perform their third album, 1998's "Cruelty And The Beast", in its entirety at several shows this spring and summer.

Catch the opportunity to see this opus nocturne performed in full, along with some more hand-picked offerings and haunting classics at several headline shows in April, as well as at Dokk'em Open Air and Summer Breeze this summer.

As exclusive support for this tourgasm, the visionary hellhounds from Suffolk will bring their Nuclear Blast labelmates and new aeon black metal masters THE SPIRIT.

* CRADLE OF FILTH only

CRADLE OF FILTH will tentatively enter the studio in the fall to begin recording its new album. The follow-up to 2017's "Cryptoriana - The Seductiveness of Decay" is expected to arrive sometime in 2020.

Released in September 2017, "Cryptoriana - The Seductiveness Of Decay" was recorded at Grindstone Studios, Suffolk, U.K. by Scott Atkins, who has been the resident go-to producer for CRADLE OF FILTH for several albums.

In March, CRADLE OF FILTH will return to North America once again to promote "Cryptoriana - The Seductiveness Of Decay". For the second leg of its North American onslaught, the band has enlisted industrial/metal shock rocker WEDNESDAY 13 as well as theatrical metal newcomers RAVEN BLACK. 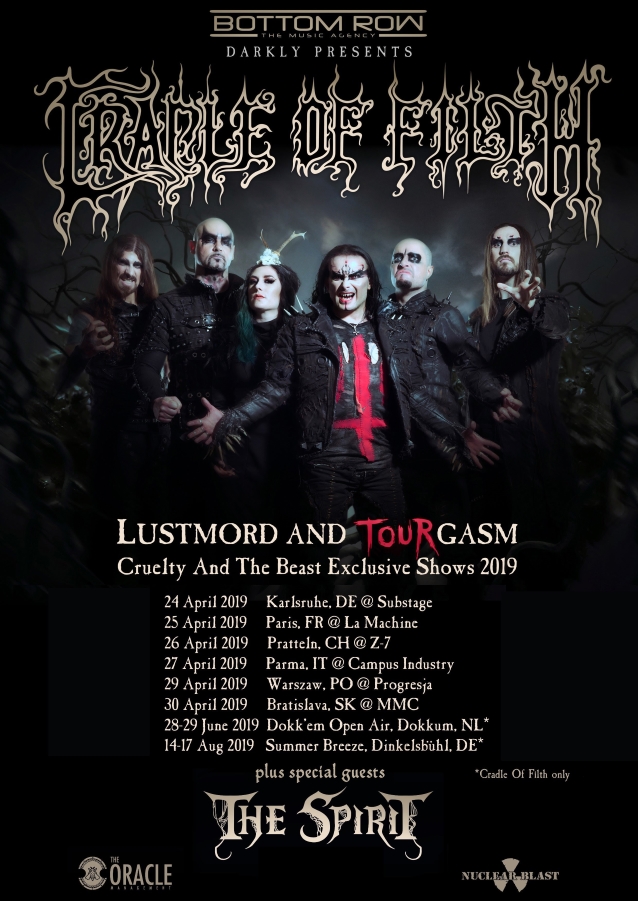