British extreme metallers CRADLE OF FILTH have premièred a new short film to promote their upcoming foray into graphic novels, "The Curse Of Venus Aversa". Produced by Greylight Studios, the movie purports to show a secret ceremony in New Orleans recorded on a hidden camera. The graphic novel itself is co-written by vocalist Dani Filth and New Orleans comic book author Kurt Amacker, and takes place in a Victorian world populated by images, themes, and horrors drawn from the Filth's sprawling back catalog. The entire 76-page graphic novel is rendered in haunting black and white art by illustrator Montgomery Borror.

The initial Kickstarter campaign to support the project smashed through its goal in only four days, but continues through November 9. The campaign also offers fans a chance to order limited edition t-shirts and work shirts by Sigh Co. Graphics, and even handmade Dani Filth voodoo doll from Quarter Kids. The new film shows a ritual in New Orleans recorded on a hidden camera, in which the dolls are blessed by the city's premiere vampire storyteller, Lord Chaz Howell.

From his home in Suffolk, Filth spoke on the movie, "I understood that the doll blessing ceremony took place, but things may not have gone as planned. Kurt sent me the video the other day. You'll have to watch to see what happened. Strange things seem to occur in that city."

Filth's co-author, Kurt Amacker, stated from a dark bar in the city's infamous French Quarter, "I think people need to see the film to understand what we might've uncovered here. I've still got a lot of unanswered phone calls out right now. Sometimes, New Orleans just kind of takes you. Regardless, I think people need to be careful when they accept these dolls into their homes."

The Kickstarter to promote "The Curse Of Venus Aversa" is CRADLE OF FILTH's first experiment with crowdfunding, and the group couldn't be happier. Dani Filth continued, "This 'adult graphic novel' represents a new step for the band, because the reader doesn't see us running around as superheroes or anything. This is about the larger forces in the universe that may have given birth to CRADLE OF FILTH — or others like us, in centuries past." Indeed, the story centres on a disgraced poet who writes under the assumed name of Lord Daniel Impudicus. After losing his fortune and facing prosecution for obscenity, he embarks on an ether-fueled quest to solve the murder of his lover, Gabrielle.

Now, with little more than a week left in the campaign, fans will have one last chance to pre-order their copies of the graphic novel, the shirts, and the dolls. Amacker emphasized the urgency for fans to pledge before the campaign's conclusion. "This is the first printing of the book. There may be a second one next year, but it will have a different cover (also by Jamie Huntley). The shirts and the dolls may be limited to the Kickstarter campaign. We're really making as many as people order." After taking a sip of his drink and staring across the bar, he concluded, "Seriously, be careful with the dolls."

Fans that wish to see the short film should visit the band's Kickstarter page. 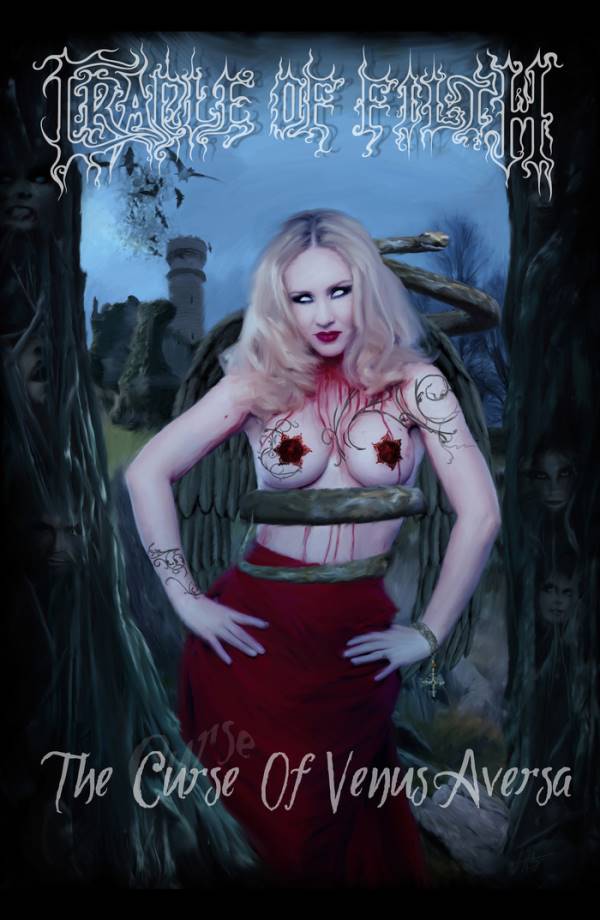