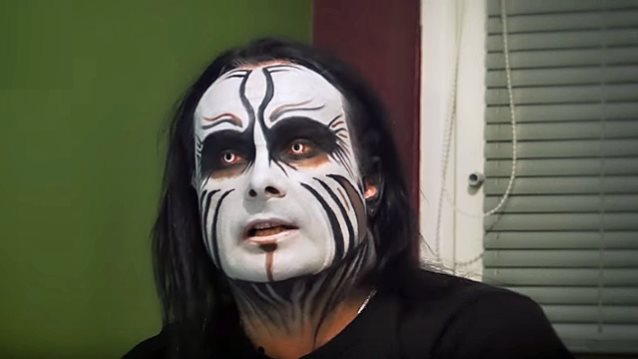 TV Rock Live recently conducted an interview with vocalist Dani "Filth" Davey of British extreme metallers CRADLE OF FILTH. You can now watch the chat below. A couple of excerpts follow (transcribed by BLABBERMOUTH.NET).

On the events of November 13 in Paris, France, when more than 129 people were killed in seven coordinated terrorist attacks, including at the Bataclan, a French music venue where EAGLES OF DEATH METAL were performing:

Dani: "The three previous tours — maybe four, actually — we've always played the Bataclan. So, yeah, it was with some shock, obviously. We had a strange incident there as well, because our roadie spotted this man who was loitering around and he just as being very suspicious. And he got so worked up about it that he actually went to our tour manager and said, 'Someone's acting really strange in the crowd. They've been there all day, walking around. Nobody knows who they are, and they're in the crowd.' So, yeah, he was a bit worried about that, and he mentioned that before. He doesn't know whether they were casing the joint or whatever, but, yeah… What can you do? They could strike anytime anywhere, and people have just gotta be vigilant. You can't live in fear."

On whether the Paris concert massacre has changed his band's view of touring:

Dani: "Well, there's a lot of things that have happened. 9-11 didn't change our views of touring. The death of the PANTERA guy didn't change our view of touring. A little bit… Everybody knows they're vulnerable when they're on stage. There's so many bands out, so many venues, so many places… It doesn't necessarily have to be a band either. The day after the French incident, we played in Copenhagen [Denmark], and we had two members of the S.W.A.T. team hiding out by the entrance with fully automatic rifles — just hiding, just in case anything happened. I don't think anybody was aware that they were there."

On what he would consider to be the "perfect world":

Dani: "The perfect world would be a place where people respect each other, but it also would be a less populated place, and that would involve governments imposing legislation where people had to pay to have more children. I know it sounds an awful thing to happen, but to safeguard… You know, not all of us believe in the fact that we're gonna go to heaven where we're gonna be suckled by hundreds of virgins after death. Some of us have a view to the future and think if we're populating the planet at this huge rate, in a couple of generations, there won't be enough resources, and people will be dying regardless."

On his biggest fear:

Dani: "Obviously, you've got personal fears about family and money and mortgage and how you're gonna pay for your next luxury yacht. [Laughs] That's always a concern of mine. But, yeah, I fear for the future of music, because of the current climate of people downloading and having such a short attention span that they find it very hard to… People prefer to spend their money on whatever — I don't know; computer games or whatever — rather than albums, and the realization that they will have soon that their favorite bands will start disappearing, winking out like faded stars, because they won't have the money to do quality records or the money to tour. I know quite a few bands that I'm very good friends with, big bands, that people have taken other jobs. And they haven't worked their whole lives — they've worked in the music industry — so going out and doing a manual day's work is, not a surprise, 'cause they work hard, but it's been a struggle for them, because they've got no qualifications in that area of expertise. And so it's just making their lives very difficult musically. We're quite fortunate in our band that we've survived twenty-two years, we're a big band, but the mountain is sliding, and the bands are sliding downhill, because there's such an avalanche of new bands and bands are reforming because they've reached the age where they've got a bit of time on their hands — they're in their mid-forties — and they wanna restart the band, and the lack of sales… So I do fear. I don't believe it's the death of music. I think with the opening up of Eastern Europe and Russia, that will extend people's touring cycles., whereas before they used to just go to… they'd do Europe, they'd do Asia, they'd do America, primarily."

CRADLE OF FILTH's eleventh studio album, "Hammer Of The Witches", which was released on July 10 via Nuclear Blast. The CD marks the first release with CRADLE OF FILTH's new lineup, which includes new guitarists Ashok (of Czech groups ROOT and INNER FEAR) and Richard Shaw (of English acts EMPEROR CHUNG and NG26).

CRADLE OF FILTH will embark on the "Inquisitional Tourture" North American headlining tour in January. Support on the trek will come from BUTCHER BABIES and NE OBLIVISCARIS.