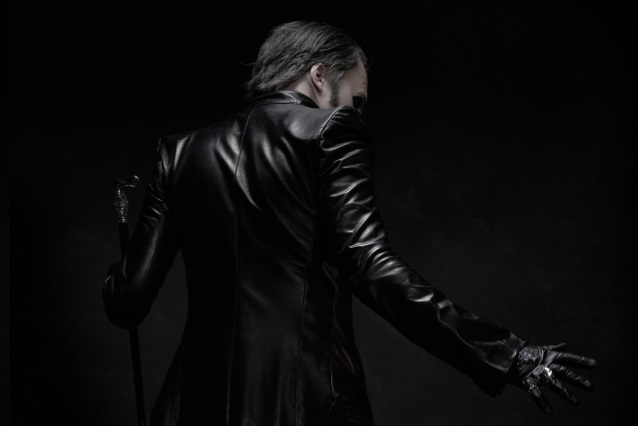 Matt Bingham of the Z93 radio station in Saginaw, Michigan recently conducted an interview with GHOST founder and main songwriter Tobias Forge. You can now listen to the chat below. A couple of excerpts follow (transcribed by BLABBERMOUTH.NET).

On whether he feels GHOST can one day exist without any original members, like KISS leaders Paul Stanley and Gene Simmons have repeatedly said about their own band:

Tobias: "I think that there's a lack of perspective that we have as a music-loving community — the general population, I guess. I mean, I've never heard Beethoven's music played by him, and that's fine. Same as Bach and Vivaldi… And I think that just because we're living at the tail end of the classic rock era, where the masters are still — half of them, at least — are alive, there's no way for us to understand how they will live with the idea of rock and roll 50 years from now when all of them, all of us, might be dead. So it is not for me to… My job, my only task is to try to do this as good as possible. First and foremost, I need to do it for myself and my family; that's what I'm doing. And then you try to make it as easy to… in whatever extent there will be an aftermath, some sort of legacy to keep — either be it copyrighted things, monetary things, you just try to box it as neatly as possible in the future for anyone who's gonna take care of it. But I have no idea if there will be a demand. That will be something that… it's not up to me to think about. And it's not up to me to talk about KISS that way. I've liked KISS from when I was three years old. I've seen them, the real deal, with all the original members when they came back in '96 and all that, and that's fine. How that is being revered and treasured in the future when they're not able to do it anymore because of physical conditions or not, basically, being alive, it's not up to me to… That's for the future [generations] to decide whether or not they wanna be entertained with that. But I would love for… when I'm 60, 70 years old, and if I have grandkids who wanna go see the KISS show, that would be lovely. Of course. What else are we gonna do? It wouldn't be the same thing, but it's fine."

On whether it was his goal with GHOST's upcoming album, "Prequelle", to write more radio-friendly songs:

Tobias: "Yes. I've always been very — for lack of a better phrase — hit-seeking, hit-driven. Even when I wrote death metal songs for a death metal record, I was always trying to do my best to make it as catchy as possible, because that's how I like music. I prefer catchy, passionate, temperamental music. And as an upside of that, GHOST's repertoire has over the years been piqued by a few, sort of, hits. And, of course, when you're in the [process] of making a new record, it's impossible not to be aware of the fact that the previous cycle had three songs that [did] well on the mainstream rock chart, whatever. And, of course, if the new record doesn't have any of that, it's gonna be looked upon as a failure. So I'd love to have four. I'd be happy with three. I'm still excited about two, and if 'Rats' is the only one, fine, great. That's fantastic. That's more than I ever had before I had the three first ones. So I think it's unrealistic to expect that bands did not think about it. You want to be as successful as possible. You wanna have the strongest legs to stand on as possible for every album that you're doing. But the trick, for me, that also warps my head a little… Every time I'm done with a record, I feel very happy about [the fact] that I always try to write new songs. If we had an 'X' amount of success with 'Square Hammer', for example, or 'Cirice', or 'Pinnacle', I try to write songs that differ from them, so that we don't go into the same beaten path and try not to repeat anything. The same thing with the whole album — I try to write 10 new pieces of music that you haven't heard before. And it gets harder and harder every time, because you try to fill in the blanks and you try to sort of feel out, 'What have we not done yet? What would I, as a fan…? If I tried to put myself in a fan perspective, what would blow my mind hearing as a first track on the B side? What would be the most unthinkable thing right here. And I think that that's what made 'Prequelle' as well, the same way that I think I did that with [2015's] 'Meliora'. And I really tried to do that with [2013's] 'Infestissumam', because we had a massive amount of hype from the first album [2010's 'Opus Eponymous'] that everybody was debating whether or not we could live up to or not. And I knew one thing, the best way to sell out — but not in monetary means, but from a sort of a mental sellout — would have been to try to copy 'Opus'. METALLICA did not make it big because they copied 'Kill 'Em All'. IRON MAIDEN did not make it big because they copied 'Iron Maiden', the first record; they made 'Killers'. And then they switched singers, which is a nightmare, suicidal move. That went well. AC/DC didn't quit when Bon [Scott] passed away; they did their biggest record in the world. So you have to push, push, push, push. And I think that that's the only way to make it. And you will have ups and downs, and some work and some will not. But that's having a career. That's what it is. That's life. That's how it goes — up and down. With everything — not only bands. And things change."

"Prequelle" will be released on June 1 via Loma Vista Recordings. The record was tracked last year at Artery studios in Stockholm with producer Tom Dalgety (OPETH, ROYAL BLOOD) and mixed in January at Westlake Studios in West Hollywood, California with Andy Wallace (NIRVANA, SLAYER).

GHOST played the first official show of the "Rats! On The Road" U.S. tour on May 5 at Riverside Municipal Auditorium in Riverside, California.