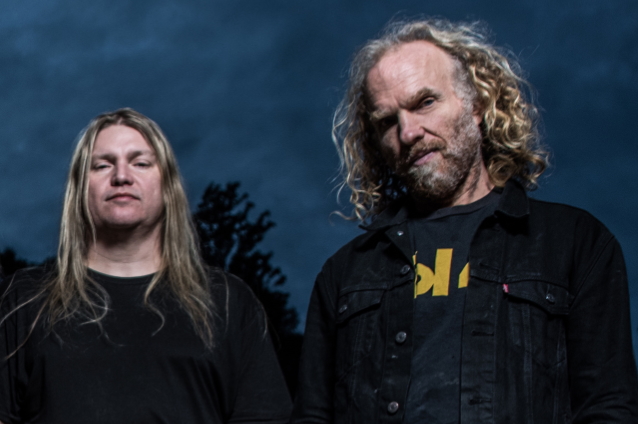 CORROSION OF CONFORMITY bassist Mike Dean says that drummer Reed Mullin "needs to take care of himself and get his shit together" before rejoining the band.

Mullin, who co-founded CORROSION OF CONFORMITY in 1982 as a hardcore punk act alongside Dean and guitarist Woody Weatherman, has missed a number of shows in the past three years due to a variety of health issues, including an alcohol-related seizure he suffered back in June 2016.

During a brand new appearance on the "Talk Toomey" podcast, Dean was asked for an update on Mullin's status after the drummer failed to appear with the band on a recent tour.

"I really couldn't say firsthand," Dean said. "Basically, he needs to take care of himself and get his shit together. And if that happens, the door's open for him. And if it doesn't, well, that's how it is. People need to wanna help themselves. You can't just push them to get help — they've gotta wanna help themselves."

Asked who is currently playing drums with CORROSION OF CONFORMITY, Mike said: "Mr. John Green from Manchester, U.K., who was basically teching for us. Reed had some sort of incident where, basically, just a few hours before getting on a plane to play Bloodstock [festival] a few years ago, I heard that he wasn't gonna be able to make the trip. And as I was calling the tour manager in the U.K. to say, 'Hey, we're not gonna be able to make it,' he said, 'You know, John could learn all those songs.' And I thought about the idea of just pulling the plug on this whole thing we worked hard to do, and I said, 'You know what? Let's try that.' And he stepped up with 24 hours notice — slightly less than 24 hours notice — learned a bunch stuff, studied up and just went out there in front of basically 60,000 people who were there to see JUDAS PRIEST, et cetera, et cetera, and just nailed it, with energy and all that. So, it was, like, 'Well, this seems to be the way to go.'"

According to Dean, the reason there are so many stories about roadies stepping up and filling in for bandmembers on tour is the fact that "the people that do that job are professionals, and they understand having a job to do, whereas some of these musicians, they lack gratitude and they don't understand that they're not necessarily God's gift to everyone. We try to approach things with [the attitude of] we've got something to do, we've got a job to do," he said. "It's artistic, it's fun, we try to make it transformative, or whatever, but every day, you've gotta get out there and do it, do what we're supposed to do. So we need somebody that has that work ethic to be in it with us — not somebody that's gonna hold us back while they destroy themselves… It's not like I'm trying to police what somebody does, but you have to be able to do what you're there to do and project something positive and something life-affirming, hopefully."

CORROSION OF CONFORMITY kicked off the second leg of its North American headlining tour last month. The "A Quest To Believe, A Call To The Void II" tour commenced on July 26 in Poughkeepsie, New York and will run through August 25 in Providence, Rhode Island. Support is being provided by CROWBAR as well as LO-PAN and QUAKER CITY NIGHT HAWKS.