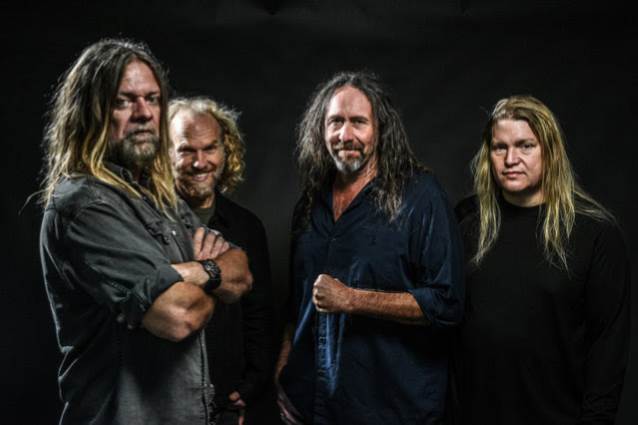 Rene Botello of Rock All Photography recently conducted an interview with CORROSION OF CONFORMITY guitarist Woody Weatherman. You can listen to the entire chat below. A few excerpts follow (transcribed by BLABBERMOUTH.NET).

On his thoughts on doing meet-and-greets:

Woody: "I'm totally cool with them. As a matter of fact, we don't really do that many official meet-and-greets, but we like to go out and hang out at the merch booths and chat with folks. That's what we do pretty much every night after we play, especially if we're in a support slot. We just go out there and chill and maybe have a cold beverage or two with people and have a couple of conversations. It's all good. So often, there are no meet-and-greets. You mentioned before some of these festivals and stuff, especially the ones overseas. They'll have a signing tent where you kind of go and sit down and run a line. It's kind of impersonal, but you do get to meet people that way."

On whether he knew during the recording of C.O.C.'s latest "No Cross No Crown" studio album that it would be received so well:

Woody: "No. I tell you: Whenever we first started recording it, we just went into the studio, we didn't have any ideas, per se. We just had a few riffs floating around and we pretty much wrote it and recorded it as we went. It was really a blast. We would just go and do these four and five-day sessions and at the end of those sessions, we'd have songs that didn't exist before. It was an experience. It was a fun way to make a record. Luckily, the label, Nuclear Blast, they were in no rush. They were, like, 'You guys just take your time. No pressure. Do it at your own speed.' And we did. We took maybe longer than we should have, but it was fun. It was a great process. Thank goodness those guys [Nuclear Blast] were way cool about it. They're pretty laid-back guys at the label — they know what they're doing. They know it doesn't really matter when an album comes out as long as it's the right album. Nobody remembers the day it came out. They just remember that it's a good album. That was the point the whole time, which is cool."

On whether he thought C.O.C. would have such a long career while they were recording their 1984 "Eye For An Eye" debut:

Woody: "[Laughs] No, I mean, we were kids. At that point, whenever we recorded that very first album, we had never seen a studio. We had no idea. And talk about doing things — we recorded that whole album in a day-and-a-half. We just went in and played. We were kids. Of course, no idea that 30, 30-plus years later we'd still be doing it and having fun. We always have to tell ourselves as long as we're enjoying it and the fans keep supporting it, we're going to keep doing it."

On the band's upcoming tour schedule:

Woody: "It's going to be a busy one. Whenever you put a record out, like this new one. We're going to stand behind it. We're going to stay out there. We're going to keep touring. We just got back from a little European run and a South American run, but once we get done with this trip with BLACK LABEL SOCIETY here this summer in America and Canada, we're busting back over and doing another European run. We're staying busy. We plan to work on into the new year supporting this album."

On the lack of FM radio airplay for C.O.C.'s new songs:

Woody: "If radio plays it, I know a lot of the satellite stations who are more geared toward heavier music, but sometimes over-the-air radio, it's a little more commercial, shall we say. If we get much play, it will be on the SiriusXM type of things. Occasionally, there are stations who have their hard and heavy hour at 11 at night or something like that and that's probably where you're more likely to hear CORROSION OF CONFORMITY. It's always been like that. If you want to get on commercial radio, you need to be a little more commercial, I guess. That's not really our thing."

On what he hopes C.O.C.'s lasting impression on the musical world will be:

Woody: "I think we've sort of accomplished that in one way or another just by the pure longevity of the band and who we've been able to tour with over the years and the diversity of all that. I think every time we do a record we want to try to not make the same record. So, we're always looking forward to that. It will be a little bit different, but people know what to expect with C.O.C. It's going to have a certain sound, but it's not going to be really different from that last one."

"No Cross No Crown" was released on January 12. The album is the group's first studio effort with guitarist/vocalist Pepper Keenan in more than a decade.

CORROSION OF CONFORMITY will join BLACK LABEL SOCIETY on the second leg of its North American tour along with EYEHATEGOD this summer. Set to commence July 14 in Cadott, Wisconsin, the trek will make its way through nearly two dozen cities, coming to a close on August 11 in Sayreville, New Jersey.