CORROSION OF CONFORMITY, CROWBAR and MOTHERSHIP will join forces for a North American tour in early 2019. WEEDEATER and THE OBSESSED will provide support on select dates.

CORROSION OF CONFORMITY's latest album, "No Cross No Crown", came out in January via Nuclear Blast Entertainment. The LP is the group's first studio effort with guitarist/vocalist Pepper Keenan in more than a decade.

"No Cross No Crown" was recorded in North Carolina with longtime producer John Custer. CORROSION OF CONFORMITY cut the disc in about forty days over the course of a year.

CORROSION OF CONFORMITY guitarist Woody Weatherman told Guitar Interactive Magazine about "No Cross No Crown": "This record was approached a little differently than previous [albums]. We didn't spend a lot of… There was, like, no pre-production; we didn't have much of an idea of shit before we all showed up. It was, like, just… we showed up, [and] we'd do four- or five-day sessions."

"As we were writing the songs, it started to take shape," Pepper added. "And once again, it was becoming something more than we… as a unit, it became bigger than the sum of its parts. And so once you get to that thing where it's in your head and you're consumed by it, if it ain't right, it's wrong. You've just gotta keep going at it."

"There were several things that we threw in the trash," Woody continued. "We'd spend half a day on somebody's idea, and if it wasn't working after half a fucking day, throw it in the fucking trash and move to the next thing."

Pepper went on to say that CORROSION OF CONFORMITY's music still sounds as valid today as it did when it was first recorded. "I think we can look back at C.O.C.'s career, you can look at [all the albums] and go… It sounds weird to say it, but they stand the test of time," he said. "And it's really important that it doesn't sound dated. I don't want it to sound like it's the new millennium or the '90s or whatever; it's gotta sound like… when you play it 20 years later, it still sounds correct."

"It's been a conscious thought of ours for a long time," Woody added. "'Let's not make a record that sounds like it was made in 1991 or something. Although we're making a record in 1991, let's try not to do that. Let's make it sounds like it's…' Like Pep said, in 20 or 30 years, it still sounds relevant." 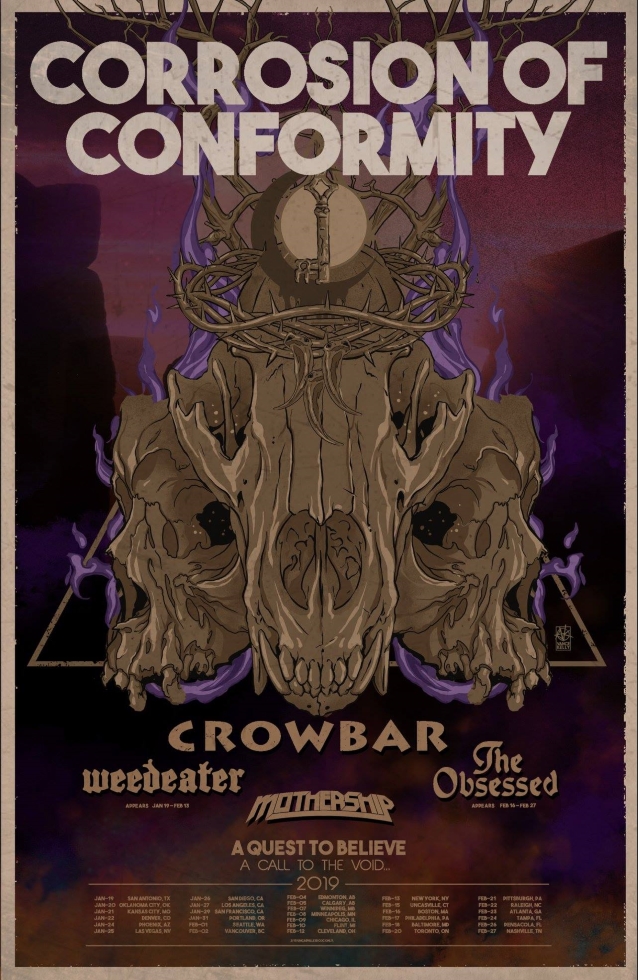