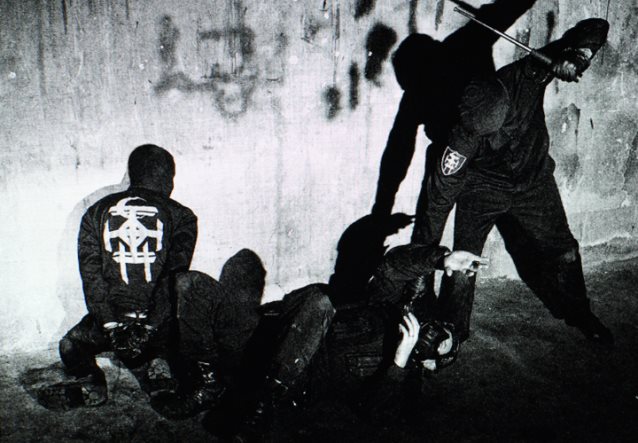 "Bullets And Graves", the new Brian Sowell-directed video from CORRECTIONS HOUSE — Mike IX Williams (EYEHATEGOD), Scott Kelly (NEUROSIS), Bruce Lamont (YAKUZA), Sanford Parker (MINSK) and their minister of propaganda, Seward Fairbury — can be seen below. The song comes off the band's "Last City Zero" debut, released late last month via Neurot Recordings, and is an unapologetically violent, roadside nightmare marred by shady characters, nihilistic beatdowns and paths unknown. Shot completely in black and white, the production is as intriguing as it is unsettling.

Produced by Parker at Electrical Audio, Soma Studios, 60 Psycho Hum and Nodferatu's Lair, "Last City Zero" offers up eight psychologically alarming hymns that span well beyond the traditional confines of sound. On "Last City Zero", the legion traverse tectonic plate-shifting doom and the downcast gloom of Kelly's usual ouevre into mutated industrial hissing and clanging EBM beats from Parker, squalls and drones of oblique saxophone from Lamont and Williams' familiar phlegm-drenched, razor-grated ire and all points in-between. Together they embrace the unkind, the diseased, the forgotten, the morose, their lush anti-soundscrapes and shadowy verses — at once beautifully hideous, graceful and terrifying — a product of societal ruin and psychological decay. Cold, mechanical, prosaic and pungent, "Last City Zero" is boundless in its genre voyage.

CORRECTIONS HOUSE recently announced its European takeover, set take place this December. The rituals will commence on December 3 in Hamburg, Germany and level more than a dozen European metropolises before coming to a close December 21 in Wroclaw, Poland. Additionally, the band will preach its end-time message atop the main stage of the 013 venue in Tilburg on April 10, 2014 at Roadburn. On Friday, April 11 at Het Patronaat, Kelly, Williams, Parker and Lamont will each perform solo material, aided and abetted by a selection of others as they see fit. As a precursor to the overseas assaults, CORRECTIONS HOUSE will sully the stage of the Cactus Club in Milwaukee on November 29 and the Empty Bottle in Chicago on November 30, with additional stateside presentations to be announced in the coming weeks.