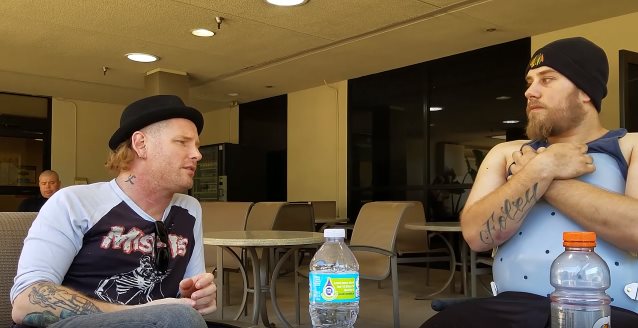 On May 15, Aaron Foley was struck by a pickup truck, leaving him paralyzed from the waist down. A huge fan of all of Taylor's projects, Foley had met the singer several times in the past, including at the video shoot for the recently released song "Fabuless". With the help of a local radio station, Aaron's mother reached out to Taylor to set up a personal visit to her son.

Much to Aaron's surprise, Taylor turned up at the hospital, rendering Foley speechless. The rocker, who is currently on tour with STONE SOUR, spent nearly an hour chatting with Aaron, with the entire visit captured in a video clip which has since been posted on YouTube.

"We can't thank Corey Taylor enough to take time out of his busy day on tour with STONE SOUR to visit Aaron," Foley's stepdad wrote on YouTube.

Aaron's family has set up a GoFundMe page to help ease their financial burden. They have raised close to $4,000 since the campaign was launched on May 18.