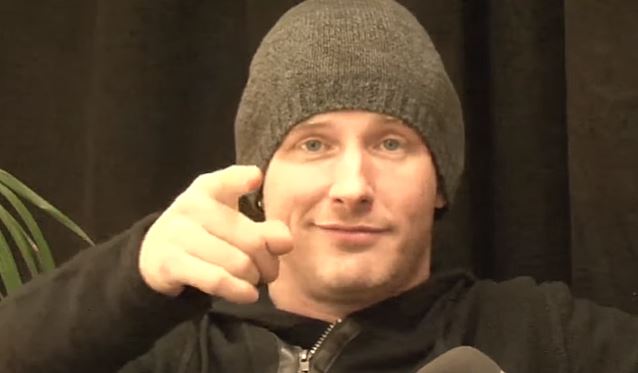 Germany's EMP Rock Invasion recently conducted an interview with SLIPKNOT and STONE SOUR frontman Corey Taylor. You can now watch the chat below.

Taylor also spoke about his appreciation for American rapper, record producer, and entrepreneur Dr. Dre. He said: "[Doing something with] Dre would be really cool. I have so much respect for him, especially after seeing the 'Straight Outta Compton' movie. That movie is so good; it's amazing. So good. And I knew it was going to be, 'cause, I mean, I was a huge N.W.A. fan when I was growing up, so I was, like, 'I really wanna see it.' And it blew me away. It exceeded my expectations. It was so good, man. It was so real. Cast well. It didn't hold anything back. And it was just so good, man. It deserved all the accolades that it got."

As previously reported, SLIPKNOT has laid plans for a massive summer headline tour with MARILYN MANSON and OF MICE & MEN. The North American trek will see the Grammy Award-winning group bring its explosive live show across the U.S., with stops in New York, Los Angeles, Chicago, San Francisco, Philadelphia, and many more.

SLIPKNOT was nominated in both "Best Rock Album" (".5: The Gray Chapter") and "Best Metal Performance" ("Custer") categories at the 58th annual Grammy Awards, which was held on February 15 at Staples Center in Los Angeles.