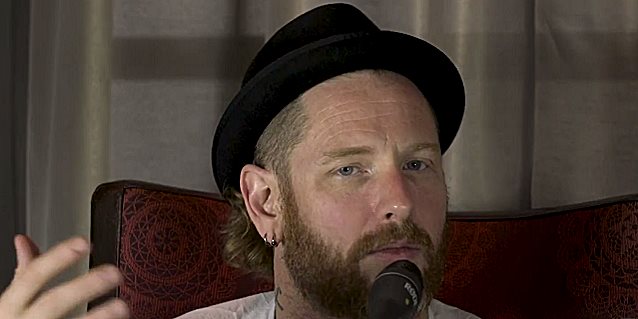 SLIPKNOT and STONE SOUR singer Corey Taylor was recently interviewed by Kris Peters of Australian's Heavy. You can now watch the chat below. A couple of excerpts follow (transcribed by BLABBERMOUTH.NET).

On how the songwriting process in STONE SOUR has changed since the departures of bassist Shawn Economaki and guitarist Jim Root and the additions of Johny Chow and Christian Martucci:

Corey: "It didn't change a lot. It made things interesting when it came to writing, because we'd all always written. Me and Josh [Rand, guitar] have always been the main songwriters in STONE SOUR; we've always brought the majority of the material. So this was just a matter of kind of getting to know Johny Chow's and Christian's writing style, which fit in perfect with us, to be honest. It was exciting to really kind of embrace that type of musical taste. And it really encouraged us to bring a whole different style out of ourselves or really even to open up more than we had even tried to in the past. So in a lot of ways, man, it was a great way for us to kind of re-establish the band."

On how hard it is, physically and mentally, on him to go through the transition between his two bands, SLIPKNOT and STONE SOUR:

Corey: "It's not simple, I'll tell you that much. It's difficult. But I've always been able to give myself a few months to kind of readjust and get my head together and spend some time with family and everything and really kind of reground myself. Because I know that not only am I gonna be going into an entire cycle where you're playing shows and you're writing music and you're giving everything you've got, but there's also all the press that comes along with it. It takes a lot out of you, man. It's one of those things where it's a good problem to have, and as long as you understand the nature of it, you can try and adjust and give yourself enough time to catch your breath, because it means that much to you. So, yeah, it's difficult, but it's so worth it too."

STONE SOUR's new album, "Hydrograd", will be released on June 30 via Roadrunner. The disc was recorded at Sphere Studios in North Hollywood, California with producer Jay Ruston, who has previously worked with ANTHRAX and STEEL PANTHER.

STONE SOUR will be special guests of KORN on the latter act's "Serenity Of Summer" trek, which starts on June 16 in Salt Lake City and wraps on August 2 in Cleveland.