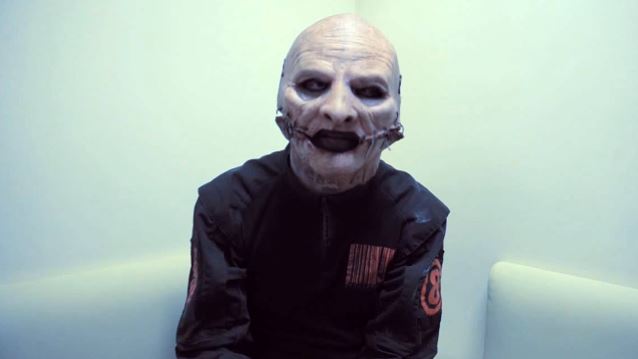 In a brand new interview with Ronan McGreevy of The Irish Times, SLIPKNOT frontman Corey Taylor was asked if it is true that the band is considering writing a new album already, having waited six years between 2008's "All Hope Is Gone" and 2014's ".5: The Gray Chapter". The singer responded: "We're talking about it. We don't want to rush right in and do anything. Now that we have told this story that we wanted to tell, we're definitely thinking about it. Time will tell."

He continued: "This band has a habit of touring itself into the ground and it's not an easy show to do.

"By the time we're done touring with this ['.5: The Gray Chapter'], we might need some time away, but you never say never.

"This album proved that we're never at a loss for musical ideas. We've proved that we can do it well and still make the kind of music we want to make."

Taylor also spoke about the six-year gap between the last two albums, explaining that "it was the musical equivalent of letting go of that long-held breath."

He continued: "Six years, you might as well retire at that point. It is just not that kind of world we live in anymore. We also knew that we weren't just going to just run right in and make an album. We were going to wait until it felt right and the fans knew that and their patience really helped us deal with the fact that we had a lot to deal with it in terms of losing Paul [Gray, late bassist] and parting ways with Joey [Jordison, drummer]. We needed to make sure that, if we were going into the studio, we had to do it for all the right reasons. When we did go in, we knew exactly what we wanted to do and say, but there was no guarantee that the fans were still going to be there."

Taylor added: "For me, it was very gratifying to have the album come out and be as well received as it did and still be received as well as it is. I'm still getting hit on by people who tell me that it this song or that song. I just love that. There are only a handful of bands in the world who can say that. Luckily, we're one of them."

SLIPKNOT will tour Europe and Australia through the end of February before kicking off a series of U.S. festival appearances in late April.