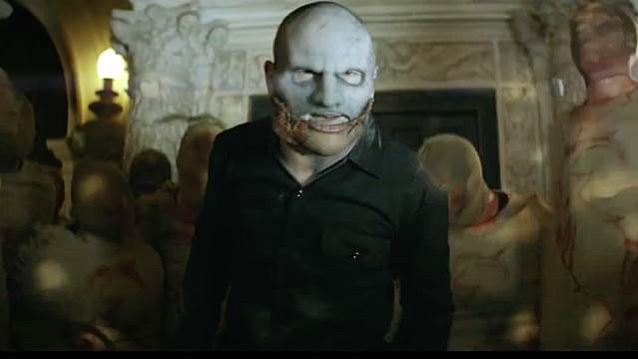 SLIPKNOT frontman Corey Taylor says that the band had a hard time finding a "direction" in the four years since the passing of the group's bassist Paul Gray and credits the SLIPKNOT fans for helping the band get through the pain of losing one of its key members.

"There were a handful of moments where I can honestly say that, it didn't feel like the band was over, but we didn't know… I mean, we were all kind of knocked for a loop," Taylor told Mistress Carrie of the Worcester/Boston, Massachusetts radio station WAAF. "There were a handful of times where it was just, like, 'What do we do now?' I mean, that's what it comes down to: what do we do now? And, luckily, we did it the right way, in my opinion, for us."

He continued: "People deal with things completely differently, but I knew, for us, that it was gonna take getting back on stage and really kind of seeing if we wanted to do it without Paul. I mean, that was the biggest thing. So we went out and we did the Sonisphere shows [in Europe] three years ago, and it went really well. That first show was hard for us, but slowly but surely, the audience, man, the fans, they picked us up and they held us there, and they helped us get through it, to the point, by the time we got done with the Sonisphere shows, we knew that, 'Okay, we can do this. We want to do this. Now what?' There was a few more years where we were just kind of trying to figure out when the right time to make the new album would be. 'Cause some of us didn't wanna just run right in and record a bunch of stuff; we needed to feel right about it. And that time came at the beginning of the year. We all kind of got together and kind of put the pieces in place. We played a bunch of stuff for each other and we were, like, 'This feels really good. Now let's go into the studio and take these demos and make them SLIPKNOT songs and let's make some SLIPKNOT music.'"

He added: "So there was never a time where it felt like it was over, but there was definitely a time where we couldn't find a direction. And luckily we waited until it was the right time to do it."

Gray was found dead in May 2010 in a hotel room in a suburb of Des Moines, Iowa, where he and SLIPKNOT were based. He was 38 years old. He left behind his widow and a daughter, October, who was born three months after his death.

SLIPKNOT on Friday (September 12) revealed its new masks and its new members — at least what they look like — in the video for "The Devil In I", the first single from the band's upcoming album ".5: The Gray Chapter". The clip, directed by percussionist Shawn "Clown" Crahan, shows off the new headgear worn by the seven original members, while giving us brief glimpses of the band's new drummer and bassist, who are both wearing the same mask.

Taylor told The Pulse Of Radio that SLIPKNOT wants to honor its past while also moving forward. "It's respect, but at the same time it's about healing the wounds, you know, and starting to take those steps forward, and it's about time for that," he said.

The band has not revealed the identity of either new member, but now new evidence has surfaced online that the man replacing Gray is named Alessandro "Vman" Venturella. Venturella has served as a guitar tech for MASTODON, COHEED AND CAMBRIA and others, while also playing in the band KROKODIL.

".5: The Gray Chapter", SLIPKNOT's fifth studio album, arrives on October 21 and is the band's first without Gray and drummer Joey Jordison, who was dismissed last year.

The band will stage a two-day Knotfest event in San Bernardino, California in late October before kicking off its "Prepare For Hell" tour on October 29 in El Paso, Texas.