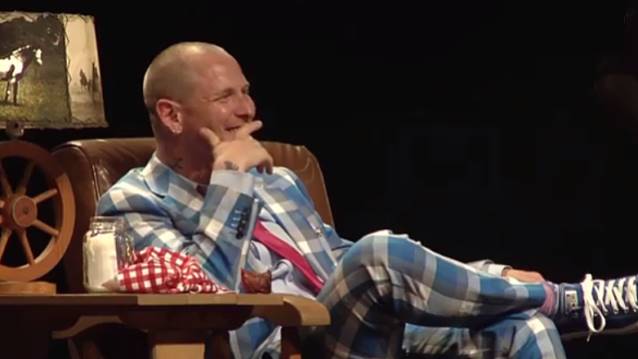 ANTHRAX guitarist Scott Ian and SLIPKNOT percussionist M. Shawn "Clown" Crahan are among the nearly a dozen musicians and comedians who honored and lampooned SLIPKNOT and STONE SOUR singer Corey Taylor at the "Monster Energy Roast On The Range With Corey Taylor" on Thursday, May 15 at LC Pavilion in Columbus, Ohio. The third annual event in Revolver and Guitar World's Rock & Roll Roast Comedy Series — and first to be held in the heartland — launched the weekend-long festivities for Rock On The Range (May 16-18), which this year drew rock fans from around the country to Columbus Crew Stadium with 120,000 tickets sold (40,000 attendees per day). Former SKID ROW singer Sebastian Bach served as roastmaster while Jose Mangin (of SiriusXM and "Headbangers Ball" fame) was also on hand to serve as the evening's official DJ and emcee.

A new 15-minute clip of Taylor roasting several members of the celebrity dais at last week's event — including Bach, ANTHRAX guitarist Scott Ian and HATEBREED frontman Jamey Jasta — can be seen below.

"When you wrote the song 'Destroy Everything', did you know you were talking about your own career?"

"You said I have the voice of an angel. At least I'm versatile. You sould like you're trying to harmonize with a wood shredder."

"Jamey's band is pretty hardcore. To be a fan, you have to own a skateboard and get at least a C on your report card."

"Pearl Aday is a musician, a mother, a wife, proving women can have it all, except an attractive husband. But the truth is Pearl married Scott because, after being Meat Loaf's daughter, she wanted to stay away from famous musicians."

"Pearl, it's true, it's true, I'm a devout atheist, but at least my wife doesn't have to fuck me through a sheet. And to be fair, honestly, [Pearl] doesn't do that anymore for religious reasons. She's just tired of getting rugburns from that horrible fucking goatee."

"He's the best host we could get for what he costs."

"We're grateful that Sebastian could fit this into his schedule, because, luckily, this roast isn't taking place in 1989."

"I've known Sebastian for a long time. He's a metal dude all the way. And nothing shows his dedication to metal more than his appearances on the CMT reality show 'Gone Country' and VH1's 'Celebrity Rap Superstar'."

"It's awesome that both Scott and Sebastian are here, because of that iconoclastic, groundbreaking reality show 'Supergroup'. I think you guys might have been tied in the ratings with 'That Metal Show'."

"ANTHRAX had the honor, a couple of years ago, of playing at Yankee Stadium for the 'Big Four' concert. Which is the only time Scott Ian has been referred to as 'big.'"

"The only reason that concert was called the 'Big Four' was because the 'Big Three And Some Guys Who Really, Really Need This Gig' didn't fit on a t-shirt."

"Monster Energy Roast On The Range With Corey Taylor" will air exclusively on Howard Stern's SiriusXM channel Howard 101, through the SiriusXM Internet radio app on smartphones and other connected devices, and online at www.siriusxm.com, on Friday, May 23 at 10:00 p.m. ET/7:00 p.m. PT. The show will replay on May 24 at 9:00 p.m. and on May 25 at 9:00 p.m. Howard 101 is one of Howard Stern's two exclusive SiriusXM channels. Howard 101 features shows, specials and his legendary tapes archives.

A portion of the proceeds from the Monster Energy Roast On The Range With Corey Taylor is benefitting MusiCares, a nonprofit organization founded by The Recording Academy to provide a safety net of critical assistance for music people in times of need, including emergency financial and medical assistance, addiction recovery services, and more. 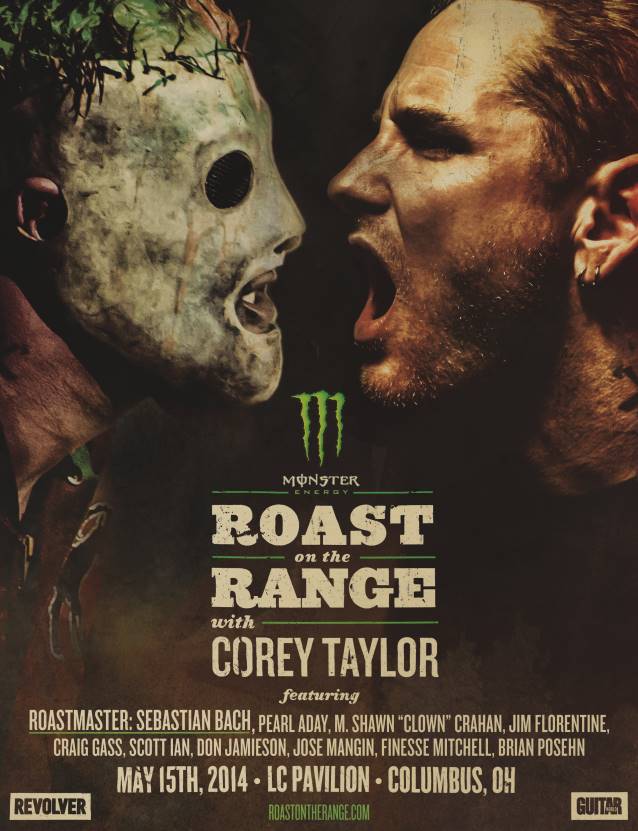