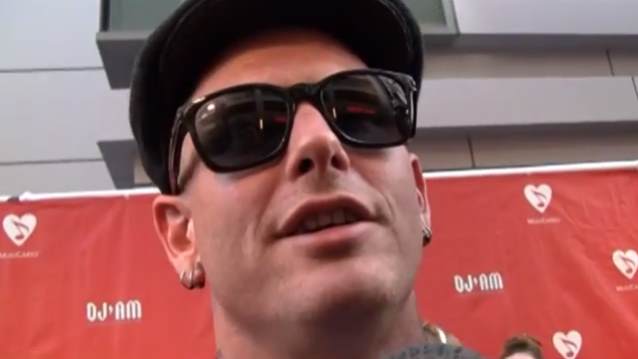 IndiePower.com spoke to SLIPKNOT and STONE SOUR singer Corey Taylor on the red carpet of this past Monday's (May 12) 10th annual MusiCares MAP Fund benefit concert, which honored BLACK SABBATH singer Ozzy Osbourne. Speaking about what inspires him to continue making music after nearly two decades in the music business, Corey said (see video below): "Hearing all the crappy music that's out there inspires me just enough to wanna make new music." He added: "You know, I mean, as long as you still do it for the same reasons that you did when you were 13, inspiration could come from everywhere. I mean, we all still get very passionate about where our lives are, we all still experience loss, regret, pain, so, I mean, life is enough of an inspiration for anybody."

Asked how easy it is for him to shift gears and switch from SLIPKNOT to STONE SOUR from one album-tour cycle to the next, Corey said: "It's easier than you think. I mean, they're so different that, for me, it's as simple as hearing the music, and then, 'Boom.' It's a great problem to have that I'm in two great bands. So I take my cues from the music and I just do what I do."

Corey also had some words of advice to share with artists trying to make it in today’s challenging music business. He said: "I say this to all new bands: the thing they should really learn how to do is to do it live, do it for real, do it on a stage, make mistakes, play in front of five people — you know, remind yourself why you wanna play music in the first place. 'Cause too many people just shove it into a computer these days and let the computer do the work for 'em instead of really learning their chops and cutting their teeth. So, learn how to do it for real and then do it for an audience."

Taylor said in an interview with Front Row Live Entertainment at the same event that SLIPKNOT's first album in six years is "coming along," adding, "I actually left the studio to come right down here. So it's a matter of time, trust me. It's gonna be rad . . . Everything is going exactly how it needs to go. So it's gonna be really awesome."

The new SLIPKNOT album will be the band's first since the 2010 death of bassist Paul Gray and the late 2013 dismissal of drummer Joey Jordison.