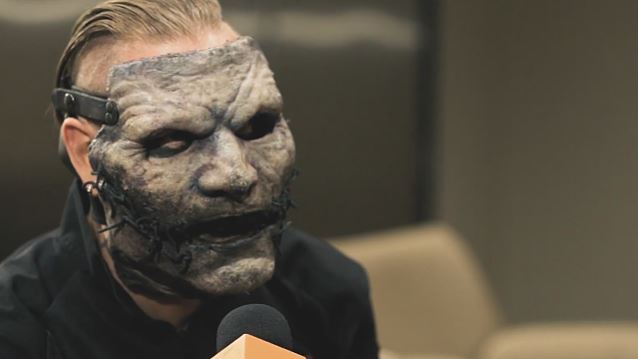 SLIPKNOT frontman Corey Taylor has told Exclaim!'s Aggressive Tendencies that the band has a distinct sound, whether they're categorized as "nu metal" or a precursor to New Wave Of American Heavy Metal.

He said: "I think we're just kind of our own genre, to be honest. I mean, there's all these different genres, and then there's SLIPKNOT, because when you hear us, you immediately know it's us.

"As far as labeling SLIPKNOT a 'nu metal' thing, I think that really kind of came down to A) the timing, when we came out; and B) the fact that we were still using a lot of hip-hop elements and whatnot. But I think, honestly, we were more of a precursor to what they called the New Wave Of American Heavy Metal. I thought we were kind of filling in that gap."

Taylor also talked about SLIPKNOT's longevity and why he thinks the band has managed to survive two decades without losing any of its popularity. He said: "Look at the bands that have stood the test. I mean, we're mentioned in the same breath as KORN, as DEFTONES, as WHITE ZOMBIE, ROB ZOMBIE… I mean, those are good names to be associated with. They're still around doing it. They're some of my good friends, and they're still pushing the boundaries musically — KORN and DEFTONES, especially. DEFTONES, with 'White Pony', it was night-and-day from what they had done with 'Around The Fur' or even the first album. So it was almost like they allowed bands like us and a ton of other bands to have the freedom to explore. I think that's how you continue to do it, and you explore the concept of longevity — by not resting on your laurels."

He continued: "You know, music's about the future. It's not about what you did; it's about what you're going to do. And for me, every time I've pushed a boundary, and I hope I've done that with every album — whether it was with this band, or with STONE SOUR, or with all the guest spots that I've done — is that I have tried to do something different and I haven't repeated myself. Because then that's when you maybe plateau and you get stuck. And I think all the great bands have done that — from [BLACK] SABBATH to METALLICA to [David] Bowie to Prince to… I mean, the list goes on and on."