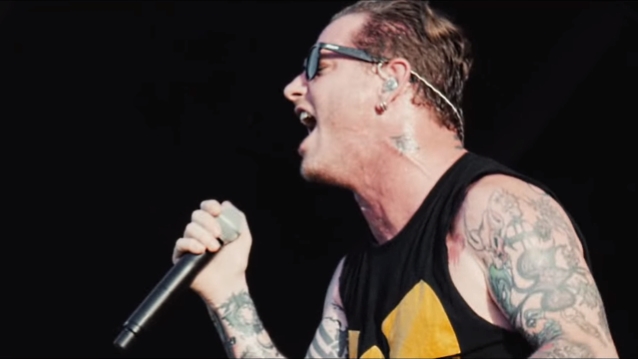 Corey Taylor says that IMAGINE DRAGONS has replaced NICKELBACK as the most hated musical artist.

The SLIPKNOT and STONE SOUR frontman made his comments during an appearance Tuesday (February 19) on SEX PISTOLS guitarist Steve Jones's radio show, "Jonesy's Jukebox", on the 95.5 KLOS station in Los Angeles.

After agreeing with Jones that NICKELBACK is "the scapegoat of rock and roll," Taylor added: "However, they are passing the baton to IMAGINE DRAGONS right now, and I love it."

The singer, who has lived in Las Vegas for the past nine years, continued: "They're awful, so that's cool. And they're from Vegas, so I'm gonna go home to protests. Can't show my face in this town now. Yeah, people are slowly coming back to appreciate NICKELBACK and then just turning their irksome ire towards IMAGINE DRAGONS."

Two years ago, NICKELBACK frontman Chad Kroeger had some unkind words about Taylor, calling SLIPKNOT a "gimmick" and describing STONE SOUR as "NICKELBACK Lite." Corey later responded, saying he got a swift apology from Kroeger's NICKELBACK bandmates, whom he called "super-cool dudes," and referring to Chad as "Captain Ego from Planet Douche."

In his original statements, Kroeger had accused Taylor of talking trash first — something Taylor said he didn't remember very well.

"I said something maybe, like, 15 years ago, but I was drinking then. Nobody was listening to me then," Corey said in a 2017 interview. "And I haven't said anything since. I don't even think about him. For real. This came so far out of left field that I woke up to everyone, like, blowing me up. And I was like, 'Really?!'"

Taylor will play a solo show tonight (Wednesday, February 20) at The Roxy in West Hollywood, California. Opening the event will be CHERRY BOMBS, the all-girl dance group led by Taylor's girlfriend Alicia Dove.