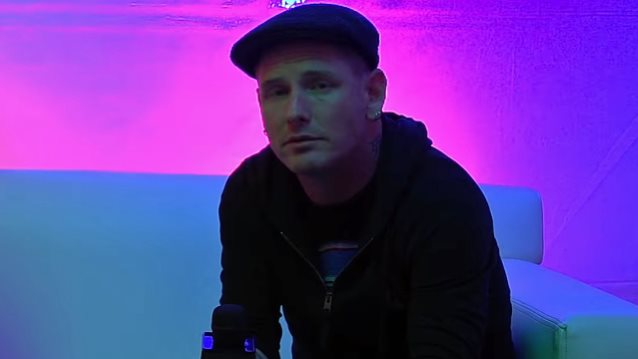 Asked to recall the first time he heard BLACK SABBATH's music, Corey said: "I was… Oh, God… I wanna say I was at my grandma's house, and my uncle Alan was playing SABBATH. Which was crazy, 'cause he looked just like Cliff Burton when I was a kid, which was very crazy. And he put on 'Paranoid', and I just remember hearing that riff and being just mesmerized by it. I was just, like, 'What is that?' Then everything just kind of kicked in. And I remember listening to it and just listening to it and listening to it, going, 'I just wanna hear that over and over and over again.' Then years later, finding out that Ozzy Osbourne was not only Ozzy Osbourne but also the singer for BLACK SABBATH. I was blown away. I was, like, 'How do you get to be two amazing bands?' So it was really cool, man, to find BLACK SABBATH and then be able to become a fan and really be able to kind of trace that all the way through our history has been incredible. And then, obviously, to get to meet them and be friends with them and have them recognize me really messes with my head. It's kind of a crazy thing."

Taylor previously spoke to Rolling Stone about the impact Ozzy Osbourne's namesake festival had on SLIPKNOT. He said: "You have to go back to 1999, our first major tour. Ozzfest gave us an incredible opportunity and we were able to really jumpstart our career from there... The great thing about being a part of that Ozzfest was that you were immediately a part of a family."

Taylor also talked about his favorite Ozzfest memory and his first Ozzfest tour. "I learned that even in the midst of all kinds of crazy stuff going on, I can still be a fanboy," Taylor said. "When Ozzy hugged me for the first time, it was like being blessed. It doesn't get any better than that."