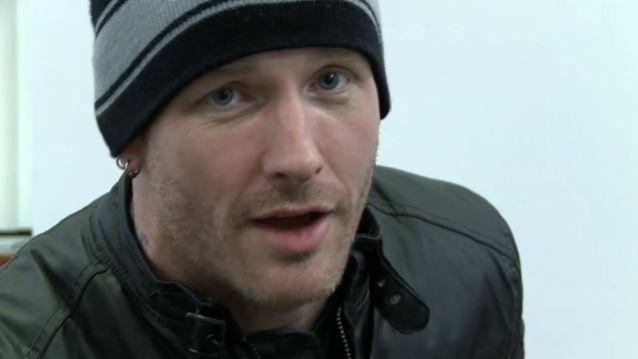 Mistress Carrie of the Worcester/Boston, Massachusetts radio station WAAF conducted an interview with SLIPKNOT singer Corey Taylor before the band's December 7 concert at the Tsongas Center in Lowell, Massachusetts. You can now watch the chat below.

Asked whether SLIPKNOT's current stage show is the band's biggest production to date, Taylor said: "It's definitely one of 'em. I call it our IRON MAIDEN stage, because there's so much stuff going on; it's insane. I don't know if it's the biggest. I mean, it's definitely… it's very elaborate. And it's really cool; we've been having fun with it. Hats off to Clown [SLIPKNOT percussionist Shawn Crahan]; he's the one that really designed it and walked it through every step and got it built and everything, and it looks really great. We brought in a whole new lighting company, and it looks incredible on stage."

Regarding whether SLIPKNOT has had any obligatory "Spinal Tap" moments with the new stage during the band's just-completed "Prepare For Hell Tour" with KORN, Taylor said: "No. I haven't, because I don't have anything that moves. They won't give me anything like that because they know I'll jump off it and break myself in half. But I believe Clown and Chris [Fehn, SLIPKNOT percussionist] have moving risers that go up and down and they spin, and the first couple of days, they were breaking down all the way up, and they go ten feet in the air. So they're just kind of, like, 'Cool. I'm not really sure how to get down from here now.' The stairs only go so far and then you kind of have to plummet to get off it. But after that, we kind of worked out the kinks, and it's been good ever since."

The "Prepare For Hell Tour" kicked off on October 29 in El Paso, Texas, just a few days after SLIPKNOT's two-day Knotfest event was held in San Bernardino, California.