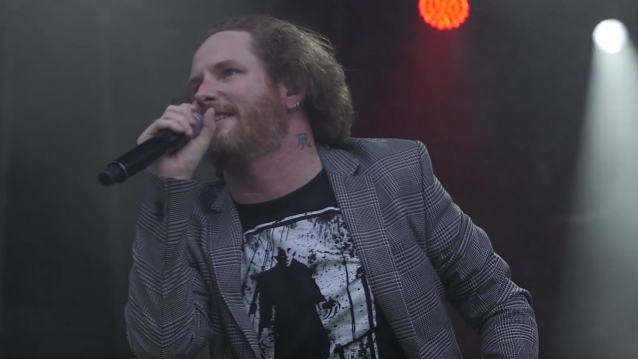 SLIPKNOT and STONE SOUR singer Corey Taylor was interviewed by Heavy TV earlier this month at the Good Things festival in Australia. You can now watch the chat below. A couple of excerpts follow (transcribed by BLABBERMOUTH.NET).

On how the other members of STONE SOUR rallied around guitarist Josh Rand when he sought out treatment for "an alcohol and Xanax dependency" earlier in the year:

Corey: "It was pretty easy. We're all brothers, so with Josh, it was a matter of just letting him know that it was okay to go and take care of his stuff. And as soon as he knew that, he was able to really focus on what he needed to do for himself. And we, luckily, had a couple of guys who were really good and could cover those bases. And we didn't lose any strides — we just kind of went for it. We were lucky. We definitely lucked out. But it also let each other know that we had each other's backs. And when you know that and you feel it, you never feel like you're gonna be let down."

On what style of singing he is more comfortable with — the menacing, harsh vocals or the more soothing, clean parts:

Corey: "I do it all. I'm comfortable with everything. I get the best of both worlds, basically, with SLIPKNOT and with STONE SOUR. And it's cool, because it encourages me to try different styles constantly — try different things and see what I can get away with, see what I'm good at. I'm sure there'd be some fans that would challenge this, but I feel like I've been pretty good so far at the things that I've done. So, for me, it's more about the challenge of just figuring out what I can and can't do and just having fun with it. So, I feel like I'm pretty adept at both."

On what fuels the anger and resentment in his music:

Corey: "Memory. [Laughs] I haven't forgotten anything. And I wish I could sometimes; maybe I'd be able to let go of some pettiness. For me, I've been able to work out a lot of things in my life. But at the same time, sometimes it's a curse to have a memory that long, but it's also an inspiration. So if I can use that to help other people work out their anger, then so be it."

On STONE SOUR's plans to get back together after the next SLIPKNOT album-and-tour cycle:

Corey: "We let it naturally happen. The great thing about this is that we've built it back to a really great spot, so now we can leave it, we can put it on hiatus knowing that it's in a good spot. So we'll just do a natural album-and-tour cycle with SLIPKNOT — that will be a couple of years — and then we'll come back and do STONE SOUR again. The [other] guys [in STONE SOUR] have all got things going on. And it'll allow us to be excited about getting back together again. But it's good that we don't force it — it just feels like a natural stop — and it gives people a chance to miss it."

STONE SOUR's latest album, "Hydrograd", was released as a deluxe edition on August 31.

The band supported Ozzy Osbourne on the initial North American leg of the legendary vocalist's "No More Tours 2" tour.

This past October, SLIPKNOT released a new song called "All Out Life". The track will appear on the band's upcoming follow-up to 2014's ".5: The Gray Chapter" album, due next year via Roadrunner.