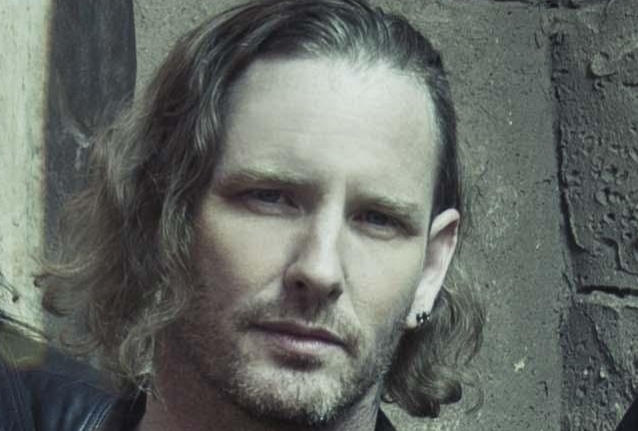 In a recent interview with Australia's Music Feeds, SLIPKNOT and STONE SOUR frontman Corey Taylor spoke about what he called "a very crazy time" in America in the wake of sportswear firm Nike's recent decision to build a global advertising campaign around Colin Kaepernick, the outcast American football player and civil rights activist.

"People are dutifully cutting up their Nikes, be them shoes or socks, in protest and yet they're doing it to spite people who they think are insulting veterans and yet they can't be bothered to actually take all those things and give them to veterans who need socks, who need shoes, who need clothing," Corey said. "I think there's just, there's a cultural flux going on in America right now. I think there's a battle for, and I don't want to say supremacy, because the pun would just be brutal there, but there's a battle for the soul of what we as Americans would like our country to stand for."

Taylor went on to decry what he said was a contrast between some Americans' youthful vision of the country's greatness and its present-day political divisiveness.

"The great myth is that it's the freest country in the world, and that's just not true," he said. "We are seeing a certain type of fascism coming in, and playing itself out. Now, while more and more people are starting to wake up to the fact that it is an absolute sham in the White House, there are still people who are clinging to that rhetoric like there's no tomorrow. Horrible things are happening in the name of that rhetoric, to people innocent, guilty — doesn't matter. It's happening for terrible reasons, racist reasons, and completely imbecilic reasons. I think just the whole country is pretty fucked up right now. That in itself is bad enough. I see it everywhere I go."

He continued: "It's tough to handle sometimes, you know. It's tough being kind of stuck in the middle, empathizing with the people who are being fucked with, but also being stigmatized because I am a white male and obviously I've come from Satan. It's hard. It's hard. It's hard to keep your objectivity when so many people are throwing their unbridled opinion at you, constantly instead of looking at it from the standpoint of how do we heal these wounds and make things better for us. Not for just individuals but for us.

"I have various theories of why this is happening, but nobody wants to talk about it," Corey added. "They just want to talk about how things are affecting them instead of how things are affecting other people. Sometimes we have to look and do things for the greater good, instead of the singular good, you know. It's a tough time. It's a tough, tough time."

Taylor also addressed the fact that outspokenness doesn't appear to have had a negative impact on his creative or commercial pursuits in the way that some industry types would predict that it would.

"I think it's, honestly, because I've never changed the way I feel," he said. "It always surprises me when people are surprised by something that I say, you know, from a political standpoint. On what planet did you ever think I would back a person like Donald fucking Trump? At what point, on what planet would you think I'd be okay with something like a white supremacist's way of thinking when it comes to politics or it comes to the way that certain police groups handle the way that they police certain groups of color? I just kind of sit up and go, nothing that I've said has ever made anything like that okay. I've had people on Twitter make this big fucking, this big tweet saying, 'Well, I just can't fucking follow you anymore. Sorry, Corey, I love your music but your political stance is garbage.' I'm just, like, 'Bye. Don't let the fucking door hit you on the way out.' I don't give a fuck, you know. The minute I start dancing around for people's fucking approval is the minute that I fucking quit, because then it's not about how I feel; It's about how they feel. I'd rather live my life than theirs."

Taylor revealed in a recent interview that STONE SOUR is already working on material for its seventh studio album.

The next STONE SOUR LP will follow up 2017's "Hydrograd", which was reissued in August in a deluxe expanded edition and contains the chart-topping single "Song #3".

Taylor did confirm, however, that he will step away from STONE SOUR in 2019 to focus on the next album and world tour from SLIPKNOT.