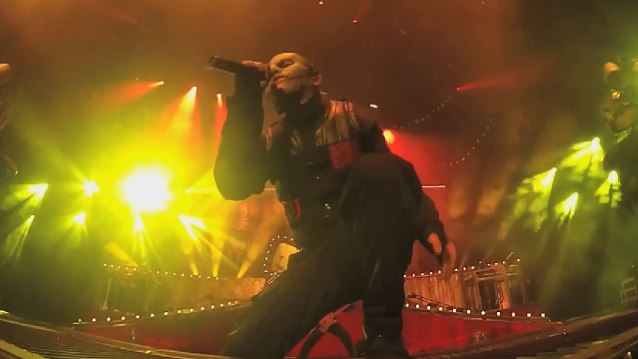 Jesse Modz of Ontario, Canada's 97.7 HTZ-FM radio station recently conducted an interview with SLIPKNOT singer Corey Taylor. You can now listen to the chat using the SoundCloud widget below.

Asked if he thinks SLIPKNOT could ever be SLIPKNOT without the masks, Taylor said: "I think in a way we could, but I don't think we'd want to. I mean, I always think back to when KISS took the makeup off back in the '80s, and I know why they did it, because they kind of hit a wall and it was time to evolve for them. But for us, the masks always evolve, for the most part, and our look always evolves, and I think because we're constantly changing, we don't feel that pressure to take them off, because we allow ourselves to roll with the times and to change with the albums. So even though I think we could, I don't think we will. Because it's not just about the masks, it's about everything."

Regarding what the mask represents to him, Taylor said: "It's definitely something that, when you think of us, you think of the masks, but in a lot of ways as well, I think when people think of SLIPKNOT, they also think of the music, and that was kind of the point."

He continued: "When I joined, I wasn't really sure what the masks represented, and the great thing is that nobody really told me and I kind of had to figure it out on my own. And that was one of the reasons why I wanted to be in that band is because I was a fan — even on a local level, I was a huge fan of this band. So without really talking to anybody, I kind of figured out that maybe the mask means something different to everyone and that's why it works. It doesn't have to be that all-encompassing value."

Taylor added: "For me, and just from my point of view, the mask for me represents the person inside who may or may not have a voice, or you may or may not have the courage to give that person a voice, because it may be controversial, it may be a little too dark, it may be a little too harsh, but if you don't give that person a voice, it almost becomes like your inner disenfranchise, that the person who gets looked over, who doesn't get to speak their mind and speak their heart, and it gets held back and then all of a sudden it overcompensates and takes over for the rest of you. So that's what it became to me and that's what it still means to me to this day."