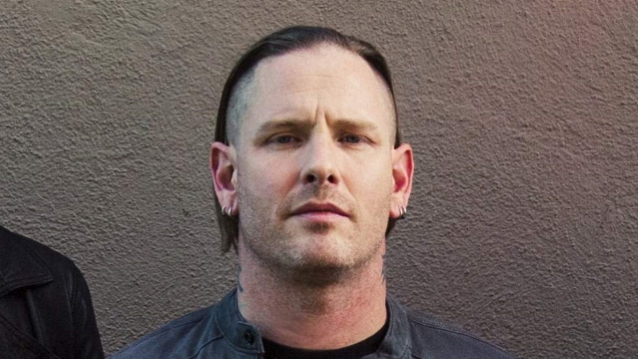 SLIPKNOT/STONE SOUR frontman Corey Taylor is apparently collaborating with U.K. rapper Kid Bookie — and all it took was Kid Bookie hitting up Taylor on Twitter.

According to The Pulse Of Radio, it all started with Kid Bookie tweeting on January 30 that SLIPKNOT's song "Wait And Bleed" was as iconic as SYSTEM OF A DOWN's "Chop Suey!" Later that same day, Bookie tweeted directly at Taylor, saying, "@CoreyTaylorRock I gotta work with you before both of us leave this earth."

Taylor responded a couple hours later, saying: "Let's talk my friend." Less than a week later, it appears the collaboration is happening, with Bookie tweeting on Tuesday (February 5): "People of earth and beyond, me and @CoreyTaylorRock have some very VERY special music coming for you soon. That is all, have a good day."

Taylor is in the middle of recording the new SLIPKNOT LP, but somewhere in there he's apparently going to make time to get together with Bookie for their new project. The next SLIPKNOT album follows up 2014's ".5: The Gray Chapter" and is due out this summer.

SlipKnot - Wait & Bleed is as iconic as Chop Suey.

People of earth and beyond, me and @CoreyTaylorRock have some very VERY special music coming for you soon ?. That is all, have a good day.