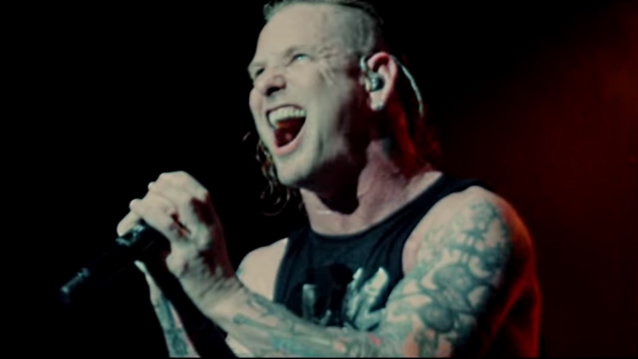 Corey Taylor has blasted so-called Holocaust deniers for spreading false conspiracy theories, saying that their actions are "a travesty to the memory of the survivors and disrespectful to the people who fought for them."

Most Holocaust deniers claim, either explicitly or implicitly, that the Holocaust is a hoax — or at best an exaggeration — arising from a deliberate Jewish conspiracy designed to advance the interest of Jews. According to The Week, while most deniers agree that some killings were orchestrated by the Nazis, they claim the figures have been greatly inflated.

Earlier today, the SLIPKNOT and STONE SOUR frontman took to his Twitter to write: "I'm gonna say this for the fuckers in the back: JUST BECAUSE YOU DON'T BELIEVE SOMETHING IS REAL, THAT DOESN'T MEAN IT ISN'T REAL. Denying things like the Holocaust. slavery, etc is a travesty to the memory of the survivors and disrespectful to the people who fought for them."

A growing number of European countries have criminalized Holocaust denial and passed other laws targeting hate speech against Jews and other minorities.

Earlier this month, a Florida high school principal was removed from his position for comments he made over a year ago in which he refused to call the Holocaust a "factual, historical, event."

A year ago, Facebook CEO Mark Zuckerberg defended the right of Holocaust deniers to share their views on the world's most popular social media platform, sparking widespread backlash and an examination of Facebook's rules.

"I'm Jewish, and there's a set of people who deny that the Holocaust happened," Zuckerberg said at the time. "I find that deeply offensive. But at the end of the day, I don't believe that our platform should take that down because I think there are things that different people get wrong. I don't think that they're intentionally getting it wrong."

I’m gonna say this for the fuckers in the back: JUST BECAUSE YOU DON’T BELIEVE SOMETHING IS REAL, THAT DOESN’T MEAN IT ISN’T REAL. Denying things like the Holocaust. slavery, etc is a travesty to the memory of the survivors and disrespectful to the people who fought for them.