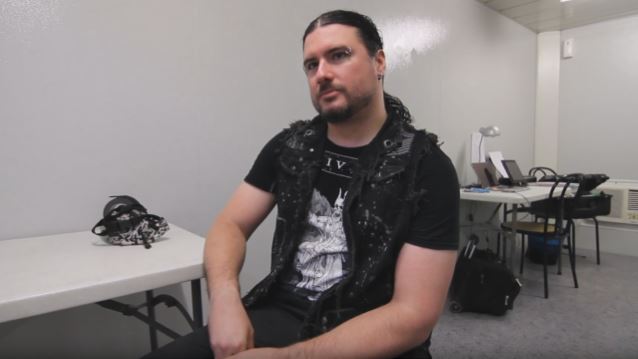 Pavillon webzine conducted an interview with guitarist Corey Beaulieu of Florida metallers TRIVIUM when the band played at the French edition of the Download festival on June 12 in Paris. You can now watch the chat below. A couple of excerpts follow (transcribed by BLABBERMOUTH.NET).

On whether TRIVIUM still writes new music on the road:

Corey: "We used to write on tour, but there's so much other stuff going on and so many distractions, it's kind of hard to focus on writing. Maybe if you're warming up for a show, you might stumble upon an idea that you will remember, but we tend to nowadays… We don't write on tour anymore. We just kind of enjoy playing shows, hanging out where we're at. We usually go out and try to find good local restaurants and eat. It kind of helps, 'cause we just kind of enjoy touring and the whole experience. When we have breaks off tour, we do a lot of writing. The last tour we [did] before we came over here, we were home for, like, seven or eight days [after it], and I demoed three new songs in that time. So usually, we just kind of take a break, and then when we have time off at home, we can really focus, and a lot of ideas just come out. So we have plenty of stuff, at least ideas, for material that has come about over the last… well, since [last] record came out, just from free time at home playing."

On whether he thinks it's more difficult for younger bands to break through in 2016 compared to how it was when TRIVIUM first came out:

Corey: "When we first came out with 'Ascendancy' ten years ago, or eleven years ago, it was at the very tail end of when CDs really sold, and we sold a lot of records. And then each album, the actual album sales [have dropped], but streaming's picked up and it's included in record sales now, so it kind of, I guess, helps bring up your numbers to actually show you that people are listening. But it's been a little different. We were lucky that we started when we did. I think definitely I can see it being a lot harder for new bands to break out, just because of the Internet and technology. Being able to record at home has just given so many people the opportunity to make albums and make demos and put 'em online — put 'em on Spotify and iTunes — that there's so much stuff out there, and then to try to get people's attention, just because we get pulled in so many different ways… There are so many new bands to check out. It's great for the music fan, because if you go out looking, you can find so much cool music that's out there. And then for bands it's a little bit harder, because just to get people's attention and get through all the other maybe not-so-good bands to try to get someone's attention is a little bit tougher. But luckily, we've been doing it long enough that people know who we are, so we're thankful for that."