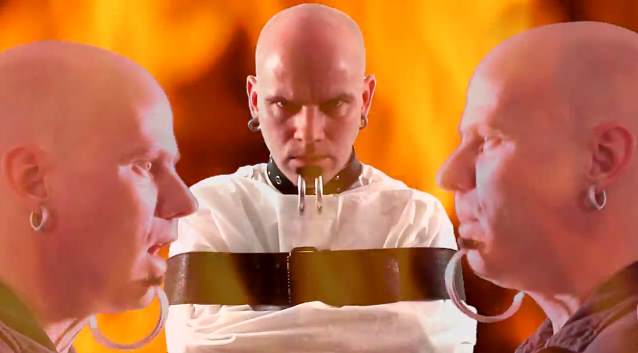 According to The Pulse Of Radio, a comedian named Brandon Muller has posted a two-and-a-half minute parody online of the heavy rock band DISTURBED. Titled "The Greatest Hit Of Disturbed", the clip takes the form of an infomercial and pokes fun at the band's "limited creativity" and singer David Draiman's "repetitive vocal phrasing," even suggesting that the band's material sounds like "one never-ending song."

The clip satirizes several of the band's hits, like "Down With The Sickness" and "Liberate", while taking apart Draiman's vocals by boiling them all down to "yuh-nuh-muh-yuh."

At least Draiman himself seems to have a sense of humor about it: he posted a link to the video on his Facebook page, calling it "fucking hysterical."

Muller stars as Draiman in the video, right down to the chin rings, although the vocals are handled by Archie Wilson.

Muller, who has also created a parody video of LINKIN PARK among many other short videos, has performed at comedy venues all over the U.S.

The DISTURBED video comes with a disclaimer that reads, "We actually like DISTURBED even more than LINKIN PARK. It’s fun to poke fun of things you love."

DISTURBED has been on hiatus since the fall of 2011, with Draiman introducing a new band called DEVICE last year. Guitarist Dan Donegan and drummer Mike Wengren also premiered a new project called FIGHT OR FLIGHT.