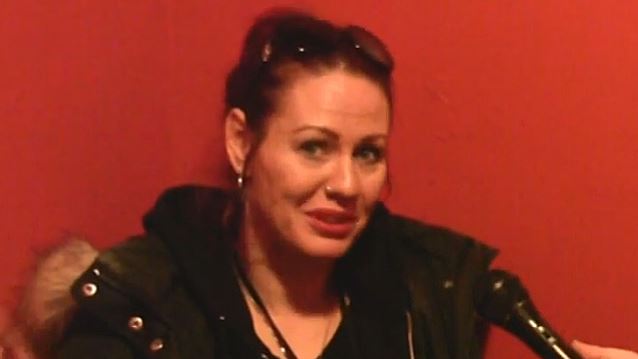 Kristyn Clark of Pop Culture Madness recently conducted an interview with COAL CHAMBER bassist Nadja Peulen. You can now watch the chat below.

Asked what it's been like to perform with COAL CHAMBER again, Nadja said: "It feels good, obviously. For me, it's been thirteen years [since I last played with the band]. The first show [back with COAL CHAMBER], I was kind of nervous, 'cause I'm, like, 'Oh my God. It's been thirteen years. How's it gonna be for me to be on stage with the guys again playing those songs?' But once I got past the first show, it's just been like we never skipped a beat. It's just like yesterday. It's like we picked up where we left off; that's what it feels like to me. And now it's just, like, okay, routine."

Nadja also talked about the writing and recording process for COAL CHAMBER's comeback album, "Rivals, which will be released on May 19 North America via Napalm. She said: "Basically, Mike [Cox, drums] and Meegs [guitarist Miguel 'Meegs' Rascón] and I just went into a rehearsal room in Van Nuys, California and worked on the parts and just started jamming, kind of old school, and we just recorded — demoing stuff at his house and in the studio. We did that for a couple of months, and then we went into pre-production for ten days and the right away went to Florida and started tracking the album. So it went all really fast — the whole process was maybe three or four months. And, actually, I think it's good, because it shouldn't really take forever to… It was just flowing for us. So it was easy."