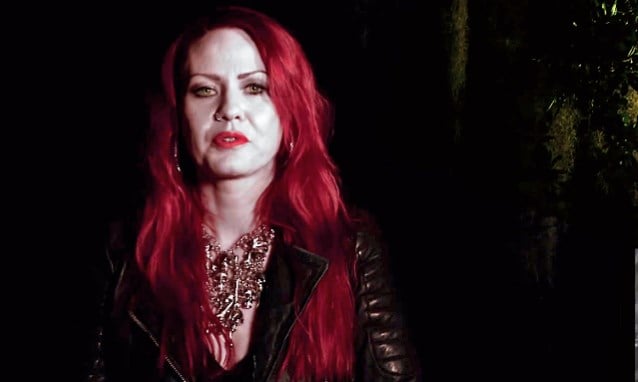 COAL CHAMBER bassist Nadja Peulen was recently asked by Revolver magazine to give an example of how she acted like a total "fan" when she met one of her idols. She said: "I got called to come jam with Iggy Pop. This was in the mid-2000s and I was at home in bed when this 'tour manager' called me and said, 'Iggy Pop is in the studio down the street and wants to jam with you.' Now, I am a huge IGGY & THE STOOGES fan and thought to myself, 'Yeah, right, he doesn't know who the hell I am and this is a prank. So I hung up the phone a few times on this 'tour manager.' A little while later, Iggy called me and I recognized his voice and he said, 'Hey, I've heard good things about you. Be at the studio in 15 minutes or forget it.' I did get nervous then and well… I was already in bed! So, I grabbed my dusty bass at the time and headed down to the studio in my PJs feeling totally unprepared. We jammed for two hours and I went home and this 'tour manager' turned out to be his son. It's still one of those stories where you think, Did that just really happen? It was very odd but it was great and Iggy was super cool."

Peulen returned to COAL CHAMBER in November 2013 following the departure of Canadian musician Chela Rhea Harper, who joined the band in late 2011 and toured with the group for nearly two years.

Peulen replaced Rayna Foss in 1999 during Rayna's pregnancy for almost 12 months while the band was on the road supporting its second album, "Chamber Music". Rayna came back to the band after her pregnancy leave and recorded COAL CHAMBER's third album, "Dark Days". Shortly after recording "Dark Days", Rayna quit the band and Nadja was recruited for the touring cycle that followed the CD's release. The band broke up during the "Dark Days" tour in 2002 and reunited nine years later.