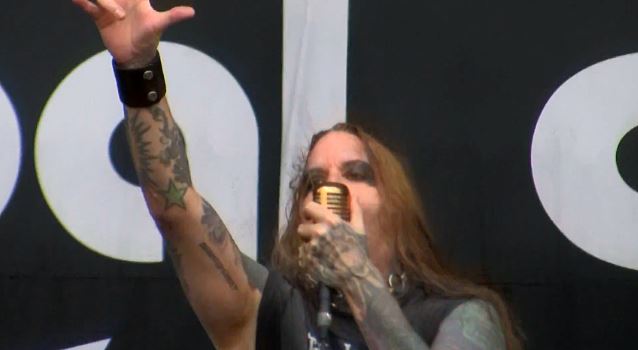 "[Al's] a good friend for a long time and a legend," Fafara told ARTISTdirect.com editor in chief Rick Florino. "He came to my house. We ate Italian food, drank wine, and had a great time recording together.

"No other artist would have 'fit' the bill to collaborate with us, as Al straddles both metal and goth the same way COAL CHAMBER does.

"His music in MINISTRY is the bridge between metal and the dark.

"He's a great guy, and I'm humbled to have worked alongside him."

Dez also spoke about the musical direction of the new COAL CHAMBER material, saying that it "absolutely exceeded my expectations" and describing it as "focused" and "honed in" with "tight arrangements" and "huge hooks."

He added: "[Our] mindset, of course, [was] different [this time around]. [We were] very intent on delivering the best within our music.

"You cannot expect a throwback record after 13 years apart, and I personally would not want to be part of that sort of record.

"This album absolutely has a fresh feel and is a total growth for the band."

COAL CHAMBER will embark on a North American headlining tour in the spring. Support on the trek — which kicks off on March 6 in Tempe, Arizona and runs through April 12 in Dallas, Texas — will come from FILTER, COMBICHRIST and AMERICAN HEAD CHARGE.