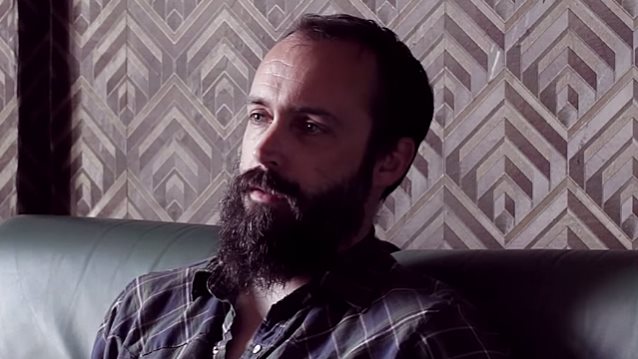 Ireland's Overdrive recently onducted an interview with vocalist Neil Fallon of Maryland rockers CLUTCH. A couple of excerpts from the chat follow below.

Overdrive: Jack White has been busy with creating a very unique and different approach to selling the vinyl format with hidden tracks in the label and holograms etched into the record itself. Would CLUTCH ever consider doing something like this to encourage music lovers to listen to vinyl rather than a digital format?

Neil: [Laughs] I consider the vinyl market to be a niche thing. It's growing but you have to keep in mind that the company that I keep, and probably the company that Jack White keeps and the company that you keep are musically inclined people and it's easy to think that this is what people really want. But the fact of the matter is that your Average Joe has no interest in a vinyl record. Having said that, it does give you freedom to do absurd things like that,. Wen we did "Strange Cousins", it had a massive fold-out, a die-cut map and a cork on the CD, and that kind of thing you can do if your only pressing like 3,000. If you're producing something like 100,000, you're going to lose money. I do know that last year was the first year that digital declined and vinyl sales increased. I'm not sure if it's going to continue, but it will definitely plateau and stay stable, because it's cool. It's definitely a cooler way to enjoy music. When you take a record and put it on, you have decided to take 45 minutes out of your day and physically interact with music. It's not like sitting on a bus with a turntable on your lap. Streaming is definitely killing digital. I can see art going two directions — you're going to have the physical thing happening on vinyl, because you have the surface area or square foot, and probably digital art that you would get to entice people to download an animated version of the artwork.

Overdrive: How do you get inspiration when composing lyrics or do you constantly have a stream of ideas/notebook where you document your thoughts?

Neil: I try everything I can; there is no system. [laughs] I try to write things down in little memo pads. Sometimes a phrase will drop out of the sky and I don't even know what it means, but I try and work it into a song. Sometimes songs write themselves very easily and other times it can be the most frustrating thing in the world. The best songs are when the lyrics complement the mood of the music and it's a very abstractive and tangible thing, and I kind of look at a blank piece of paper as a sort of crystal ball. You can listen to the music and suddenly through the mist, this movie with a very nebulous plot starts to unfold and I write a very vague screenplay for it. I probably can only justify the words being used as I'm the only one in the audience. Writing lyrics is almost like a free license to lie and tell a story, which is very liberating because no one can tell you you're wrong. I might spell a few things wrong, but that's alright because it's not a doctoral dissertation. It's important to give the listener some meat and potatoes to sink their teeth into, but if it's so literal, it's dead on arrival. If it's, like, "This song is about this and happened on this day," then it doesn't lend itself to the imagination. It's good to be vague. People ask me, "What does this song mean?" and I never tell them. So many people come to a book or a piece of music and are dead set on finding something. Charles Manson was set on finding a secret message in "Helter Skelter". If it had not been that song, it would have been another. I know that a very extreme way of looking at it, but I have heard people talk about a song and one is telling me that it's Satanic and the other is asking me, "Why are you running Christianity up the flagpole?" It says more about these people than anything.

Overdrive: You mentioned that you had toured with MOTÖRHEAD. Do you have a Lemmy story?

Neil: The first tour that we did with them, I just stayed clear of him because everybody hounds him constantly every night and I didn't want to be that guy. I ended up in an elevator with him one night by accident, and he looked at me and said, "You're from the opening act," and I said, "Yeah, CLUTCH." If there are no girls in the band, he really doesn't give a damn. So we are in this elevator and he then says, "You're very consistent," and I didn't ask him to elaborate. [laughs] There is another thing also that I think is really cool. They had their own catering with them and they had this guy Richie with them who would cook just traditional English food, basically all sorts of brown food. Yorkshire pudding and Sunday roasts seven days a week. I gained 15 pounds on that tour. Lemmy's after-show was always the same. You would get a choice of two sandwiches on white bread, cut triangularly and wrapped in cellophane. One was a cold baked bean sandwich and the other was an anchovies sandwich, I just though that he has probably been eating that for the last 50 years! He could have whatever he wants and he is just happy with that. Gotta love Lemmy.