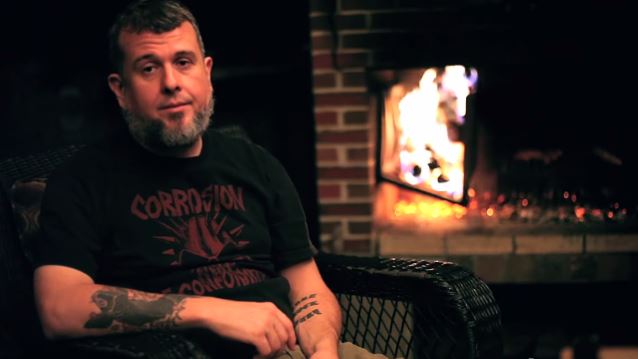 In a brand new interview with Aesthetic Magazine Toronto, drummer Jean-Paul Gaster of Maryland rockers CLUTCH spoke about the band's longevity and how the group has managed to keep its original lineup intact for nearly 25 years.

"You have to be honest about what it is you're in a band for," he said. "For us, it was because we wanted to play good shows and make good records.

"Whatever your goals are, it's going to be a better deal for everyone when you're all on the same page.

"We all have a unified attitude towards the small and big things. We're all at practice on time. We're all at soundcheck on time. If you can't all be as dedicated to the work aspect of being a band, then it's going to be really tough being a band."

Gaster also talked about placement of the band's music in television shows, including "The Walking Dead", "Sons Of Anarchy" and during countless UFC fights, as well as being part of soundtracks for video games like "Left 4 Dead", "Tony Hawk's Underground" and "Need For Speed: Pro Street".

"Up until now, we just found our music involved in projects that we thought were cool anyway," he said. "If someone approached us to have a song in a movie we just thought looked like shit, for example, we probably wouldn't go for it.

"There are a couple of things to remember here, though: the industry itself is a shell of what it used to be. Maybe years ago bands would find themselves in a situation like that and say, 'I'm not going to sell out.' And maybe years ago you could have made that argument, but at this point, bands are struggling at the local pubs, let alone getting gigs across the country, let alone a record deal. So the fact is, if this is what you do for a living, you have to find ways to make money any way that you can. For some people that means sacrificing who you are artistically."

He continued: "You never know what's going to come from what. We've talked to fans who'd never had the chance to see us live but ended up hearing us because we ended up in a video game or on a TV show. That's what they were into and maybe they wouldn't have been exposed to us otherwise.

"Any way that you can get your music out there, it's going to benefit your band.

"It's important for bands to create and utilize as many tools as they can get their hands on.

"You're never going to make your living purely off record sales. You've got to profit from concert tickets, merch and whatever else comes your way. That's how a musician has to think these days.

"We're all here to make a living off of music — you really just have to do whatever you can to spread the word."