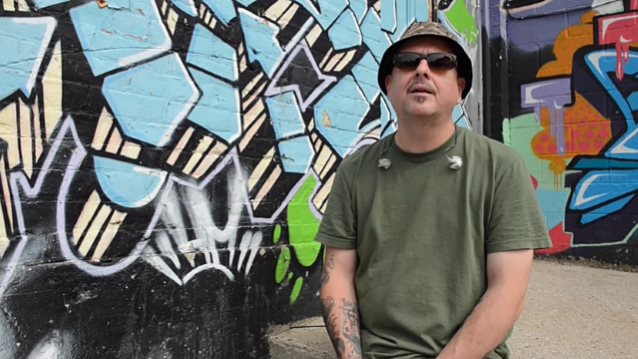 On May 21, Mike Bax of Lithium Magazine conducted an interview with drummer Jean-Paul Gaster of Maryland rockers CLUTCH in London, Ontario, Canada. You can now watch the chat below.

Asked how CLUTCH's forthcoming album, "Psychic Warfare", compares to the band's previous efforts, Gaster responded: "It's hard to say, because we are so close to it at this point and it's so very new to us. It's easier for me to make comparisons, or contrast to, [2013's] 'Earth Rocker', just because that was the one that preceded it. And I feel like, compared to that record, I think there's a little more dynamic range happening on this album. I think the tempo of the songs is a little bit more far-reaching. 'Earth Rocker' had a very specific energy to it, it was a very upbeat record, and this record also has some of those kinds of songs, but I think some of the feels are a little different — maybe a little more reminiscent of stuff that we've done even before 'Earth Rocker'. So it's definitely a departure from what we did last time."

Gaster also spoke about the songwriting process for "Psychic Warfare" and how it was different from the way CLUTCH approached its previous releases. He said: "The writing dynamic really stays the same. It really just boils down to the four of us getting in a room and jamming. That's really where most of the songs start. Rarely does somebody come to the table with something that sounds like a completed song. It does happen from time to time, but, really, for the most part, it's a pretty organic thing. I think probably the change in the style of songs also happens naturally. We don't really sit around and think what we need to do something different than last time. We just tend to always do that; we sort of just react to whatever we did. Sometimes I think we do that even on a very subconscious level."

"Psychic Warfare" is tentatively due in September via CLUTCH's own label, Weathermaker Music. Songtitles set to appear on the follow-up to "Earth Rocker" include "X-Ray Visions", "Firebird", "Quick Death In Texas", "Our Lady Of Electric Lights", "Monsters", "Decapitation Blues" and "Son Of Virginia".

In a recent interview with Pollstar.com, vocalist Neil Fallon stated about CLUTCH's forthcoming album: "There's nothing out of the ordinary of the CLUTCH canon [on the new CD]." He continued: "I think these songs were written so soon after 'Earth Rocker' that they have a lot in common. It's a faster record. It think it shares a bit of the sense of humor, lyrically, with 'Earth Rocker'. There are a lot of hooks on this record."