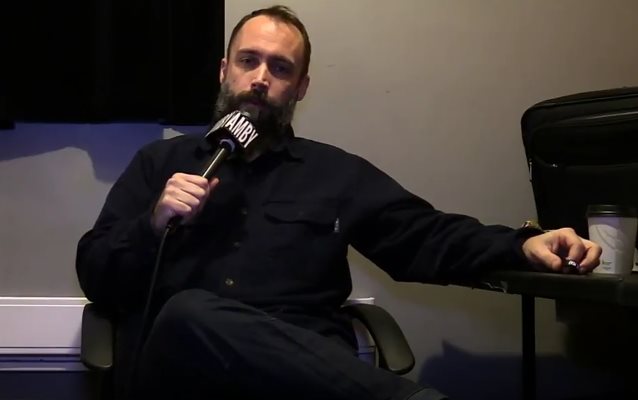 A Music Blog, Yea! conducted an interview with vocalist Neil Fallon of Maryland rockers CLUTCH prior to the band's December 30, 2016 show in Toronto, Ontario, Canada. You can now watch the chat below.

Asked about CLUTCH's plans for the coming months, Fallon said: "Well, we'll take a couple of weeks off just to unpack our heads. And then we plan to get right back into it and start working on new material with the idea that we'll probably record a year from now. So knowing what kind of tours we have, we have to start soone rather than later. And do, you know, boring domestic chores that we've been putting off for eighteen months."

Fallon also talked about how CLUTCH manages to keep things fresh during the songwriting process. He said: "Well, we write sort of a surplus of material and then we kind of cut off the fat and dilute it. I think over the years we've become more… I don't know… more skilled at writing efficient rock songs — just cutting to the chase. We've been doing this for twenty-five years and it's easy to kind of get into a… I hesitate to use the word 'rut,' but you can get too comfortable with your own tempos and your own groove. It gets too easy sometimes. To play faster is more challenging. So that's kind of what we're trying to do — just to keep up our momentum."

CLUTCH's latest album, "Psychic Warfare", debuted at No. 11 on The Billboard 200 chart after shifting 26,000 equivalent album units in the week ending October 8, 2015.

"Psychic Warfare" was released via CLUTCH's own label Weathermaker Music.

CLUTCH drummer Jean-Paul Gaster told How Was It Detroit? about the band's plans for 2017: "We're gonna write some, and then we're gonna go back on tour. Touring really never ends. We take breaks from time to time. We'll take off the first three months of next year and we'll get down to writing, see what kind of direction that's gonna take us in, and then start making plans to record. Probably what will happen is we will do some shows in the spring, and then, for us, it's really important to play the new songs live, so I have a feeling that wherever we choose to record, we'll do shows on the way out there to work through the material, play the material. You know, for me, as a drummer, those experiences are crucial to recording a record that, at the end of the day, you feel proud of. In the live setting, you can immediately tell where the pulse of that tune is. You gauge by the audience reaction, how they're latching on to whatever groove that is, and you start to tweak things — you might pull stuff back or you might push stuff, change up an approach entirely, maybe. But that's really crucial — it really brings the song to life."