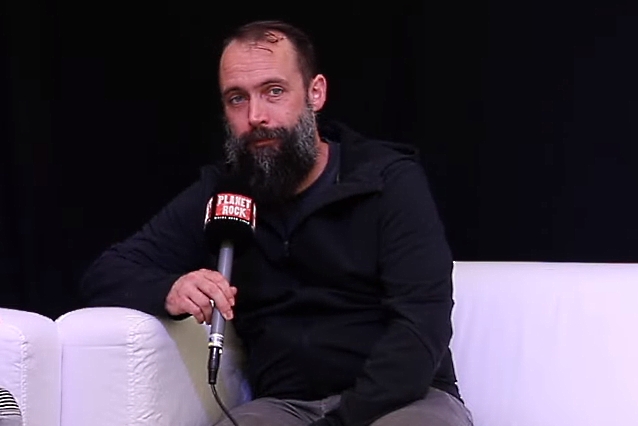 Maryland rockers CLUTCH will release a collection of newly recorded songs, "Weathermaker Vault Series", this summer. The effort will include the band's cover of the Willie Dixon 1950s classic "Evil" (later recorded by CACTUS), which was made available earlier this month.

Over the weekend, CLUTCH singer Neil Fallon spoke to Planet Rock about how the idea for "Weathermaker Vault Series" came about. He said (see video below): "Well, that song ['Evil'] and the other ones that we're gonna release over the next few months, we realized that we're not ready to record a full-length, but we have some in between tours that we can record some songs. That one, written by Willie Dixon and performed by Howlin' Wolf and then reinterpreted by CACTUS, we listened to that growing up, and we listened to that so many times. And [we said], 'Wow, this is a great song. Let's just record it for nothing else other than fun.' And I think that's important — just to record and perform music for fun. And that's what we did for that song and the other ones that we're gonna release. Sooner or later, we're gonna record our own new material and release it as we always have, but in the meantime, it's easy enough to do that."

Fallon went on to say that playing other people's material is "a great exercise, because when you try to learn a song that someone else wrote, it sounds completely alien. No matter how many times you listen to it, it's, like, 'Why did they do this here? Why did they use that word there?'" he explained. "And I think that's a learning experience that you'll take something from and hopefully put to your own music. It's like going to school, in a way."

According to Neil, fans will have to wait at least until 2020 for new music from CLUTCH. "We pretty much know what we're doing until the end of the year," he said. "We've already got stuff booked in the summer of next year. So it's trying to find those windows of opportunity [to work on new music]. It'll take us maybe three weeks to record a record, but it'll take significantly longer to write it. And we don't write on the road. After doing a show like this or at a club, we don't wake up in the morning and say, 'Let get together and write a song.' We all go our separate ways."

CLUTCH's latest album, "Book Of Bad Decisions", was released last September. The disc sold 26,000 copies in America during its first week of availability, giving the group its third consecutive Top 20 album on the Billboard 200. It was recorded was completed at Sputnik Sound studio in Nashville, Tennessee with producer Vance Powell. The album cover was designed by renowned photographer Dan Winters.