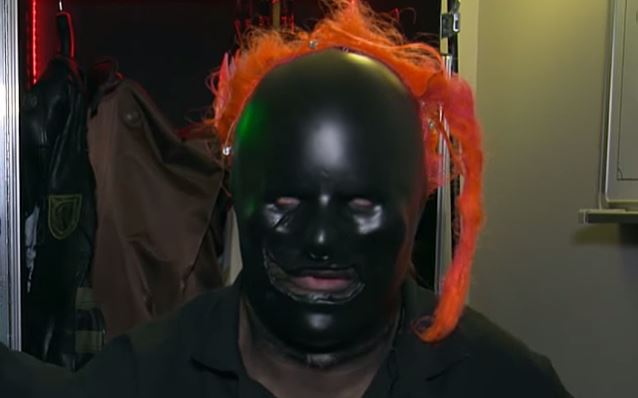 SLIPKNOT percussionist Shawn "Clown" Crahan says that he would love to see the band record a double concept album in the vein of PINK FLOYD's "The Wall" and THE BEATLES' "Sgt. Pepper's Lonely Hearts Club Band", with a movie to go along with the project.

SLIPKNOT's latest album, ".5: The Gray Chapter", was released in October 2014 following a six-year hiatus during which founding SLIPKNOT bassist Paul Gray died and original drummer Joey Jordison was dismissed. Since the CD's release, several of the SLIPKNOT band members, including guitarists Jim Root and Mick Thomson, have expressed hope that the group could record the follow-up effort sooner than expected, with Root claiming in recent interviews to have already begin compiling ideas for SLIPKNOT's next release.

In an interview conducted at this month's Download festival in the U.K., Crahan spoke to Daniel P. Carter of BBC Radio 1's "Rock Show" about SLIPKNOT's plans for the next CD. He said (hear audio below): "I've been on Jim [Root], and I'm just, like, 'Man, we've gotta write an art record. We've gotta write our 'Wall'… 'Sgt. Pepper's'… whatever you wanna say. And that's where I'm at. We've got so many records on our record deal. We've done five. I'd love it if we could do a double album, just… interludes… Have a concept, [and] maybe make a movie. I mean, things that have all been done, things that have all been done before, but… you know, our way, our interpretation. That would be a grand slam for the Clown. Don't get me wrong: we'd still do our thing. We're still gonna be SLIPKNOT."

Asked if there is a timeline for SLIPKNOT's next album, Crahan responded: "You know, I'll be honest: we're not… We're talking, but no one's throwing out any [timelines]. Because we've got quite a bunch [of touring] left, on the table, playing. And other things can really mess with the head. You've gotta stay in touch with the body, 'cause there's a lot of this left. But it's gonna happen sooner than later. It's just very exciting to see everybody excited."

As previously reported, SLIPKNOT singer Corey Taylor said in a new interview with RockSverige.se that the band will take a "couple of years off" after completing the tour cycle for ".5: The Gray Chapter". Taylor explained, "We're gonna finish touring and then we're gonna take a couple of years off again to let everything chill. I'm gonna go do my thing, [and] everybody else's gonna go do their thing... then, in a couple of years, we'll get back together and see what happens again."

Taylor's "thing" is STONE SOUR, which has two more covers EPs in the works following this spring's "Meanwhile In Burbank… Taylor told The Pulse Of Radio that his attention next year will turn toward an all-new STONE SOUR set. "2016, I'll probably wrap up touring with SLIPKNOT, you know, around — like somewhere around this summer or whatever, and I'll take five minutes off and we'll start working on a new STONE SOUR album," he said.

Following the "Meanwhile In Burbank…" EP, STONE SOUR plans to release two more EPs of cover songs in the near future, with the first one titled "Straight Out Of Burbank" and the second called "No Sleep 'Till Burbank".

STONE SOUR's last collection of original music, "House Of Gold And Bones", was a double concept album released in two parts in 2012 and 2013.