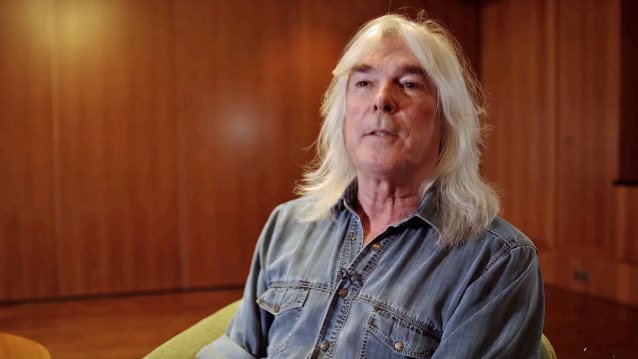 Legendary hard rockers AC/DC have uploaded a new two-minute video clip in which bassist Cliff Williams talks about his role in the band.

He says in the clip: "AC/DC has been… you know, just… I don't know what else I would wanna do. I love the music and I love playing in the band, and I'm all filled up.

"My role as part of the rhythm section is to give drive, to give foundation, and engine, if you like, [and] support the guitars.

"My first album with the band was 'Powerage', and that was 1977. It was all new and fresh, and these people, I didn't know them, and Australia, and I'm from London, and there was the whole fitting in thing. They were great — very accepting.

"They were very famous in Australia when I joined them. They'd pretty much gotten to the top of the heap there very quickly. And they'd been to Europe once or twice at that point too. But we were still touring on a modest basis. We were playing small venues with little equipment, with a little van, and we were all driving together in a station wagon and stuff. And that, over the years, has changed. Not to say it wasn't fun; it was a lot of fun."

AC/DC postponed the last ten dates of its recent North American tour after doctors told singer Brian Johnson he faced a total loss of hearing if he did not stop touring immediately. AC/DC has since resumed its tour with GUNS N' ROSES frontman Axl Rose as a "guest vocalist," with Johnson apparently not returning to the group. Cliff said: "Axl is doing extremely well, and God bless him for stepping up to do this."

Johnson had been AC/DC's frontman for 36 years, making his debut on the classic "Back In Black" album.