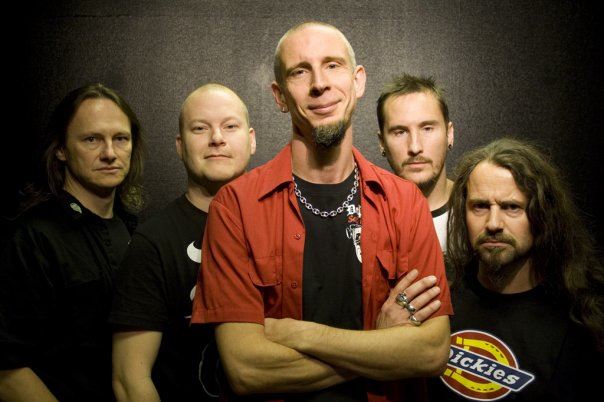 "Anyway, the simple truth here and now is that CLAWFINGER are calling it a day, throwing in the towel, going fishing, quitting and moving on to pursue other goals in life!

"After 20 years, 7 albums, more than a thousand gigs and 10 million beers consumed together, it's simply time to put the band to rest and do other things! Nothing is, of course, ever carved in stone, but please don't hold your breath; that is, if anybody out there is stupid enough to even consider doing so!

"It's been one hell of a ride, no doubt about it. Bumpy, yes; long and winding, yes; full of dead ends and wrong turns; but all the same one hell of a fucking ride, an experience to remember and treasure for life!

"All our love, repsect and admiration goes out to the people who have supported us along the way, the fans, most of all, because you've always been the fuel on our fire, but hell, even the record companies deserve a little thanking at a time like this.

"There are too many people to thank, but you know who you are, and if you've been there for us, respect to you all for the love, patience and understanding you've shown us through the years. Your dedication has been priceless and maybe we'll see you out there again for the 30th anniversary if we decide to try and cash in on past achievements with the old classic reunion trick; only time will tell!

"Thank you for everything, respect and one love to you all!"

In an August 2009 interview with Bulgaria's Tangra Mega Rock, CLAWFINGER frontman Zak Tell stated about the band's status, "We're just trying to survive like all the other bands out there. The business is very different from what it was 15 years ago. You can't survive only by being in a band these days, so we're working and doing what we have to do to pay the rent and trying to find time for CLAWFINGER. The only plan we have for a release at the moment is a remake of 'Deaf Dumb Blind' for the 20th anniversary . The plan is to re-record all the songs from that album and bring in guests. We've been talking to some of the guys from RAMMSTEIN and Peter Tägtgren from PAIN and HYPOCRISY. We've made some friends through the years and hopefully we can get them to add their own flavorings and colorings to those old tracks."

CLAWFINGER's latest album, "Life Will Kill You", was released in the U.S. in July 2008 via Locomotive Records. The CD, which entered the German Media Control chart at position No. 89 upon its European release in 2007, was recorded and produced at Sweden's Fear And Loathing Studios, a facility that CLAWFINGER runs along with the members of MESHUGGAH.