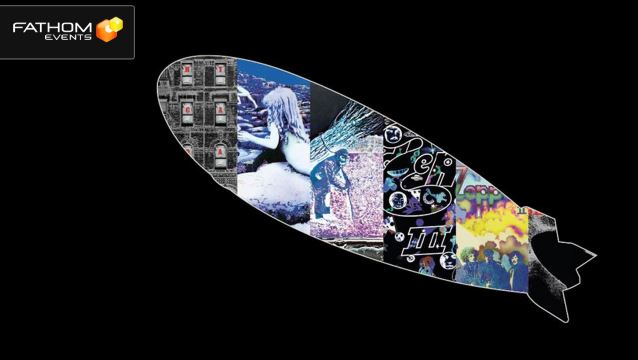 According to The Pulse Of Radio, LED ZEPPELIN fans will be able to see a cross-selection of the band's greatest concert performances on the big screen for one night only later this month. Fathom Events has teamed up with ZEPPELIN's labels Swan Song and Atlantic to present nearly two hours of classic ZEPPELIN footage shot in January 1970 at London's Royal Albert Hall in January 1970; July 1973 at New York's Madison Square Garden; May 1975 at London's Earl's Court; along with their record-breaking shows in August 1979 at England's Knebworth festival.

For theater and ticket information, log on to FathomEvents.com.

Jimmy Page explained to The Pulse Of Radio that as ZEPPELIN graduated from theaters and ballrooms to arenas and then to stadiums and open air festivals, everything about the live experience grew in proportion. "I think what happened was, it was very physical, the music, but in the early footage of us, we're sort of quite contained within it," he said. "But you start to explode more physically, as well, so, there was quite a physical performance to all of this. No, by this time, the sets are getting pretty long, ‘cause the hardest and most challenging thing was, as we did a new album, it was what material to put in and we'd just be extending the sets because you didn't want to drop anything. Because all the numbers, once the went in the set, you could have real fun with them and change them around on the night."