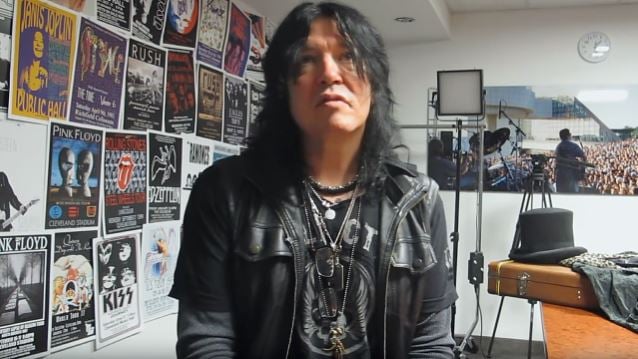 According to WKYC, CINDERELLA frontman Tom Keifer has donated his double-neck guitar and some touring outfits to the Rock And Roll Hall Of Fame + Museum's heavy metal exhibit.

Keifer told WKYC that the donation came about after the Rock Hall emailed his management team inviting him to visit the Hall during his next visit to Cleveland and asked if he would be willing to donate any memorabilia from his career. "I didn't have to think twice about it," he said, adding that, "It's a hard feeling to describe" knowing that his donation would be displayed alongside those of many of his peers' artifacts. "[It's] kind of just sinking in. To be alongside AC/DC and GUNS N' ROSES, it's an honor. It really is."

The guitar is the one Keifer used on the CINDERELLA tune "Night Songs", while the touring outfits he donated included a top hat and a jacket.

Keifer recently told RockRevolt Magazine that "some issues" within CINDERELLA — "going back decades" — have effectively sidelined the group for the past four years. He explained: "We took some pretty extreme measures to right the ship and fix things, and we made a pact as a band in 2012 that we would not do anything as a band until the issues were resolved. That's how much it came to a head. The issues are unresolved, so that's all I can say about that."